I just wanted to let you know that I’ll be reading a little more over the next couple of weeks. Why? Those of you who follow my Twitter will have seen a lot of angry, frustrated Tweets this week. And this is why: 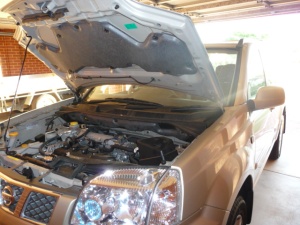 Yes, my just-out-of-warranty, regularly serviced Nissan X-Trail died suddenly on Tuesday. I drove it to the train station as usual and then when I went to start it, nothing. Not even a death rattle.

My immediate thought was to check my lights (the X-Trail doesn’t turn off the lights automatically when you remove the key, you just get a whine). Nope. At 3 and a bit years, it shouldn’t need a new battery. A lovely young man offered to push start me, but I knew it was no use. And the security guard at the station just stared at me as I leaned over the engine, car manual in one hand. (I would have liked an offer of help. I generally wouldn’t wear low cut shirts if I know that my car is about to die).

Fortunately, cue my father. An experienced mechanics teacher of more years than he probably wants broadcast on the internet, he can fix anything. So I sat around, reading with the radio on (see, not the battery) waiting.

Unfortunately, Dad couldn’t do anything. He suspected the fuel pump, but a train station car park is not the place to perform X-Trail surgery. Modern cars like the X-Trail have the pump in the tank, which is under the car. Even though the original X-Trail model released in Australia has the most clearance, nobody can actually fit under it very easily. Another gentleman suggested the immobiliser was at fault.

All we could do was tow the car home under the power of Dad’s Toyota Hilux (2WD). Mum drove the Hilux (being married to a mechanics teacher, she is highly experienced in towing) and Dad drove the X-Trail, now more like a tank on ice due to no power steering or ABS (ie. no brakes). We managed to limp home (by now peak hour was over). Cue the RAC (Royal Automobile Club) and their Roadside Assist – the first time I’ve used it in 13 years.

RAC advertise that they can get you back on the road 90% of the time. Have you ever wondered what happens to the other 10%? Well, I can tell you because it’s happened to me now. The RAC man asked a range of questions (some of them a little basic to myself – I do check the fuel gauge regularly to make sure there’s fuel) and worked in the dull light of the garage for some time to say finally, no go. I received a docket for towing to my mechanic of choice – provided it was within 10 km. (Note: this does change depending on your level of coverage. Having owned the ever-reliable Corolla and the assumed reliable X-Trail, I hadn’t thought I needed more). I needed to pay $3/km after that.

So the next day, I caught lifts and public transport while Dad, his friends (all excellent mechanics) and the men of the Veteran Car Club of W.A. puzzled over my X-Trail. Why would a new car, having one lady driver and 24300 km on the clock suddenly die? Armed with new information, Dad tried one thing after another but nothing would turn the engine over.

Nissan Australia were then contacted on the suggestion of a helpful mechanic. Unfortunately, I don’t think the operator understood a great deal about cars (what we’d tried and why we’d tried it) nor about the work that I am in (when I’m on call, it is critical that I have a reliable car – because it can mean life or death to someone else). They suggested speaking to my car dealer.

My family has a good relationship with our local Nissan dealer so my poor car was towed there (sadly more than 10 km away – I’m awaiting the towing bill from the RAC). Thank you RAC – the towing guy definitely fit their ‘happy’ advertising. As the problem can be identified relatively easily with the diagnostic computer (I believe engine errors are given a 4 digit code, which are then translated into the problem), they diagnosed a broken fuel pump. These pumps can suddenly stop working at any time – rather a concern in Australia, especially in the country! There are currently no Nissan fuel pumps for the X-Trail in Western Australia – again, a concern as these cars are used extensively throughout the W.A. government as fleet cars – from health to police. So I’m waiting at home with no transport and my car is waiting at the dealership for the pump. It could be a week or more, so I’ll be doing a lot of reading during that time!

This story is by no means finished and won’t be until my car – the first I ever bought – has the engine going and driving. I would like to thank my car dealer for paying some of the costs involved. While I might not look for another X-Trail in the future, their goodwill means that I won’t discount them entirely when I buy another car and they maintain my parents’ custom for their next 4WDs.

Hope you have a good weekend! I’m off to check bus timetables…and struggle through Blossoms and Shadows…