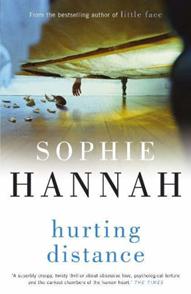 A quick rundown… Naomi’s lover has gone missing but the police don’t seem helpful. However, when she says she’s a victim of rape, a whole new series of cases is opened.

Strengths: Gives both sides of the story – the victim and the police. Despite it being the second in a series about a pair of detectives, no background is required.

Weaknesses: Naomi’s not the easiest character to like and it takes time to work out where this story is heading.

Why I read it: Read recommendations for Hannah’s books on Novel Insights.

If you liked this, try: The Brock and Kolla mysteries by Barry Maitland (such as The Marx Sisters
and Babel)

I can’t resist a bargain. $10 for a paperback is a bargain to me, so I bought this copy after reading the glowing reviews for Sophie Hannah on Novel Insights. At the demise of my local Borders store, I picked up another Hannah book (why were there so many left?), thinking that if I didn’t enjoy this book, I’d give the other to my mother. No chance, I really enjoyed Hurting Distance and plan to read the entire series.

Don’t stop reading at the mention of the word ‘series’. These books can easily be read alone and out of sequence (like the Brock and Kolla mysteries by Barry Maitland). Although they feature the same detectives (Charlie –female- and Simon) who seem to have some on-again, off-again relationship, their relationship is only a minor part of the backstory. The focus is on the crime, and what I’ve found unique in regards to this book (and it seems, the other books in the series from a quick flick) is that they offer both the police view and the view of the victim.

Hurting Distance opens with the victim, Naomi Jenkins, reporting the disappearance of her lover Robert. As Robert’s married and only meets Naomi once a week, the police aren’t terribly interested. Naomi then tries desperately for them to recognise his disappearance by reporting a rape. Only it wasn’t Robert who raped her…or was it? The story then unfolds using alternate chapters to tell Naomi’s side of the story versus that of the police. Naomi’s not an easily likeable character and it takes the reader a while to work out what is going on in her head, but Charlie and Simon are instantly likeable.

Hannah uses both language that is lyrical and other devices (such as emails, police statements) to tell the story. In that way, she reminds me of Minette Walters but the story is original and doesn’t get bogged down the way some police procedurals do. Sure, the action does reach a crescendo as the pieces of the crime fall into place, but Hannah uses innovative details (such as Naomi being a sundial maker who once sold a font to Adobe) to make this original and very, very good.

Highly recommended! These books are also available as ebooks which I’ll probably make use of in the future.