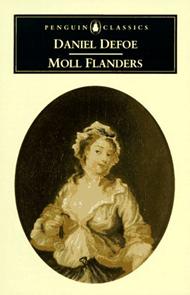 A quick rundown… Moll Flanders (not her real name) will do anything to survive – prostitution, stealing, multiple marriages…

Strengths: Must have been very original for its time.

Weaknesses: Sometimes it’s difficult to work out which man Moll is speaking about, as she doesn’t use names.

Why I read it: Green Penguin Classics are awesome (and wallet-friendly).

If you liked this, try: The Crimson and the White by Michael Faber

Moll Flanders was another of my cheap green Penguin Classics reads. This must have been rather a controversial story for its time, as Moll (one of the few named characters) is involved in many taboo subjects – sex before marriage, prostitution, gaol and incest to name a few. Even to myself as a modern reader, I was surprised at some of her exploits.

This book is somewhat different to what I’m used to. For starters, it has no chapters. Not that much of a problem, just difficult to find a good stopping place. The second issue is that hardly any of the characters are named – even Moll is a pseudonym. Moll’s husbands and lovers are not named – which is difficult when she has several of them! This did make it a little difficult for me to keep track of who was who, especially when Moll’s previous husbands turned up later in the story.

Those points aside, this would make a rollicking movie or mini-series as the nature of Moll’s downfall and eventual redemption are still topical today. I must seek one out. Moll is born in prison, yet grows up in a more gentle household engaged to one brother, but being paid for sex with the other. Her husbands disappear in various circumstances – on the run from the law and one turns out to be her own brother. I found Moll’s role as a thief to be the most interesting as the devious ways to steal things were rather imaginative (for example, telling someone their house is on fire!). Despite her trials, Moll has the ability to turn a situation to benefit her while remaining cheerful.

Certainly an interesting life, I just wish I could have kept better track of the husbands!