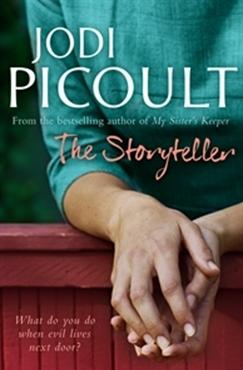 A quick rundown… Sage, a solitary baker, is asked to help an elderly man end his life. Can she do it? Can she forgive his past?

Weaknesses: Sage and Minka’s stories feel a little separate the way they are positioned within the book.

Why I read it: Sent to me by Allen and Unwin and The Reading Room – thank you!

I finished this book a couple of days ago, but I’m only sitting down now to write my review because I’ve been busy. So what else is new, you might ask? Well, I’ve actually been busy recommending this book to all and sundry – work colleagues, people at the library, people in bookshops and family. We all know that a new Jodi Picoult book is good, but The Storyteller is fantastic. Edge of your seat, crying, gaspingly fantastic. You don’t want to miss this one.

The Storyteller starts off innocently enough with Sage Singer (yes, she does have a sister called Pepper), a baker who prefers to work alone at night after an accident left her scarred and feeling guilty. She’s in a going-nowhere relationship with a married man and her only confidante is her boss and former nun. Her colleague only speaks in Haikus. So when she strikes up a friendship with elderly Josef Weber, it’s a little strange. But she and Josef get along well until he asks her a favour – to kill him. Josef’s reasoning Is that he was a Nazi SS soldier in Auschwitz during World War II and doesn’t deserve to live. But he also wants Sage’s forgiveness.

Sage’s grandmother, Minka, was a prisoner at Auschwitz – something Josef doesn’t know. She has never wanted to talk about her ordeal and hides her tattooed number under shirts and jumpers. So when Sage gets the government involved to bring Josef to justice, Minka tells her story. This is where the most powerful part of the book comes. Minka’s story as a Jewish girl growing up in Poland, forced into the ghetto and then to Auschwitz is incredibly well researched, emotive and humbling reading. Picoult makes the whole thing come to life, and although it can be uncomfortable at times, it is very powerful. It was almost a letdown when the story returned to present day and Sage as the main character.

It is also during Minka’s story that we find out what the snippets of story about Ania (a girl with some similarities to Minka) and her adventures with an upior (a kind of vampire like creature). The story was written by Minka, first as a carefree student and then continued in Auschwitz. We learn that this story has links with Minka’s fate.

Like any Jodi Picoult book, there is a big twist and shock at the end. As I was reading an ARC, I honestly thought that there was a mistake because the characters hadn’t worked out the glaring inconsistency with only a few pages to go! Fortunately, the conclusion I’d leapt to turn out to be true but the question that had been asked about forgiveness (Who can give it? If it didn’t happen to you personally, can you still forgive? Can you redeem yourself after the event?) is left up to the reader to ponder over.

I would say this is easily the best Jodi Picoult book since My Sister’s Keeper – actually, better. This is haunting, interesting and full of emotion. I’d love to see her try her hand at historical fiction; Minka’s story proves she has the talent.

21 thoughts on “The Storyteller by Jodi Picoult”