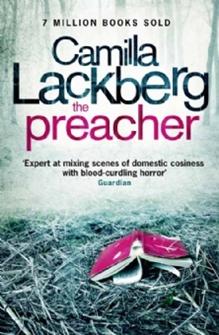 A quick rundown… The second in the crime series starring detective Patrik Hedstrom and his partner Erica, this involves a series of murders over 20 years apart. The only problem is the prime suspect is now dead…

Strengths: A good combination of police procedural and family issues.

Weaknesses: Starts off a bit slowly.

Why I read it: I’ve enjoyed other books in the series (The Ice Princess, The Gallows Bird)

Nordic crime is still hot, years after Stieg Larsson’s Millennium trilogy. We have Jo Nesbo, Henning Mankell and someone who I don’t hear a lot of but love – Camilla Lackberg. Lackberg writes a series set in Sweden’s picturesque Fjallbacka involving detective Patrik Hedstrom and Erica Falck, his girlfriend (a true crime writer). The second adventure is set at the height of Swedish summer (I’m sorry, but I had to smirk at times – the heat is less than Aussie summer – but air conditioning is probably less prevalent in Sweden) and involves a murdered girl found at a local picturesque site. Underneath her body are the remains of other girls murdered in 1979 – that case was never solved. However, the method used is the same for all girls and the prime suspect for the 70’s murders is now dead. So who is really the murderer?

Lackberg drops a few hints along the way but you’re still left guessing as to the identity of the murderer – she inserts quite a few shady minor characters that have the potential as well as red herrings that send the police well off their path. To counteract the grizzly events, Erica is heavily pregnant, hot and tired. There are some amusing scenes as numerous ‘friends’ and family descend on them for the summer holidays unannounced, and then expect her to wait on them. Her sister Anna also makes a return as a single woman now arm candy for a playboy from Stockholm. Anna’s story looks to continue in subsequent books too.

The book starts rather slowly, making much of the heat and endless sun to set a sluggish tone as the police try to find their feet in the case. However, with the introduction of the Hult family (well known to the police), the pace picks up as they all have multiple secrets to hide. With the disappearance of another girl, the police don’t have any time to waste. The seriousness of events is comically relieved with the reason why Patrik’s boss, Mellberg, has been so nice and normal recently – Lackberg has the talent to know just when to lower the tension and give the reader a reason to smile.

I’ve managed to collect the rest of Lackberg’s Hedstrom/Falck series and I’m looking forward to reading the rest for two reasons – great crime and the fantastic characterisation of Erica and Patrik. Erica is a strong woman who could easily be your friend and Patrik is a well-adjusted, reasonably happy detective (an anomaly I know), I really want to know what happens between those two!

2 thoughts on “The Preacher by Camilla Lackberg”