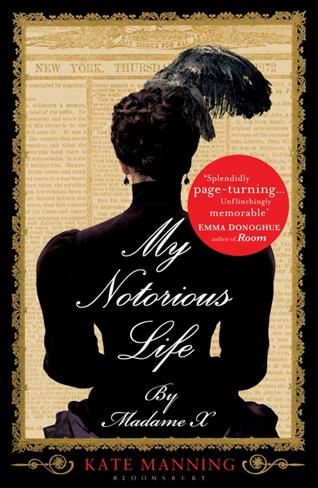 A quick rundown… Axie Muldoon is an orphan, midwife and mother who knows what each echelon of New York society is like. She tries to improve things, but ends up being chased for her efforts.

Strengths: Brilliant language, story, setting and characters that had me engrossed.

Weaknesses: Can’t think of any!

Why I read it: Received from Bloomsbury Sydney – thank you!

In my reading life, there aren’t too many books that I start the minute I lay my hands on them. Usually, I’m reading two (or three or four) books at the same time, so everything takes its place in the queue. However, as soon as I opened My Notorious Life by Madame X, I was hooked. Somewhere around Chapter Two I thought I should move out of the hallway and sit down; many hours later, I was still reading. A few late nights later when I read the final page, I really wanted to read it again.

We’ve had some fine books released in 2013, but this is going to be one of the best in my opinion! My Notorious Life sums up just what it is like to be a woman in New York in the late 1800s. Axie Muldoon is born into a life of poverty where life consists of searching for food scraps. One day, she and her sibling follow a gentleman for food – and end up on an orphan train heading out west. There, Axie is separated from her sister Dutchie and baby brother Joe. Axie eventually returns to the city, where she becomes apprentice to a midwife, who is also skilled in ‘preventative measures’. It is here that Axie learns her trade that will eventually give her the name Madame X and notoriety across America. With fellow orphan Charlie G. (‘Great’) Jones, she sets to make her fortune and women’s lives a whole lot easier. Her life is still tainted by those early experiences and she continues a long search to find her siblings.

One of the major strengths of this novel is how Kate Manning illustrates the plight of women, so different from today. Women beg Axie for tablets to ‘stop a blockage’ (i.e. cause a miscarriage) in addition to abortion. There were no reliable contraceptive devices, nor could women refuse sex – they just had to go on having babies until it killed them. Whatever your stance on abortion, the pain and suffering of the women is difficult to bear, even on the printed page. Axie’s sympathy for the women and her belief that she is truly doing the right thing have you cheering her on. Axie’s illegal activities also help to illustrate just how restricted freedom was for women in these times – it was unusual for a woman to have a business, and most of the external dealings are done by her husband.

Manning also creates an atmosphere through language that has you hearing the rumbling of carriage wheels and children playing on the street. The story is told by Axie, using the language she knows – from rough words and poor grammar as a child to developing into more refined speech as she rises in society. Initially, it was a little difficult to understand Axie, but give yourself a couple of pages and you’ll be entrenched in her world.

In addition to women’s (lack of) rights, there is an excellent subplot where people try to plot Axie’s downfall – it becomes a game of cat and mouse that you’re never quite sure where it will turn to next. The ending is truly masterful and satisfying. (I really don’t want to give away very much – just please read the book and be swept up in a New York where poverty meets extreme wealth, greed meets hunger and a quiet revolution is happening…)

I loved this book – the history is beautifully detailed and the characters flawed but engaging. It really is the perfect novel for all historical fiction fans.