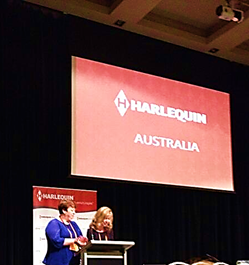 Being a Sunday, Day 2 meant I could sleep in a little more, but I still got to Fremantle quite early, so had a wander round outside and then inside, buying more raffle tickets and more books! I then dropped by the Chillout Area (sponsored by the fantastic Rachael Johns on Sunday, which meant Diet Coke and Tim Tams)! There was also a book swap table where you could swap books you’d already read from the conference bag/giveaways to new books. A fantastic idea, so I swapped The Inevitability of Stars (which I’d read early in the month) for another book.

The morning began with Jennie Jones as MC (she was brilliant) and an address by Harlequin. Harlequin spoke about their various imprints (MIRA, Mills & Boon, Escape Publishing) and their plans for the future, including more digital imprints. They covered some of their authors, including Rachael Johns (who got her own slide!), Isolde Martyn and introduced us to the genre ‘coastal romance’ with Nobody But Him by Victoria Purman (set on the Fleurieu Peninsula in South Australia). 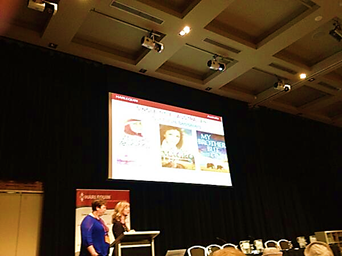 Check out the new titles from Escape Publishing!

The first session of the second day was Survivor: Submission Island. Just like the TV show, brave souls had put forward their manuscript to be read to the audience by Jennie Jones and Nikki Logan. On the panel was Abby Zidle (Simon & Schuster New York), Nina Bruhns (Entangled Publishing), Margaret Marbury (Harlequin), Joel Naoum (Pan Macmillan/Momentum) and Alex Adsett (agent, Alex Adsett Publishing Services). The panel were given signs for stop (i.e. when they would stop reading) and for when they would like to read more. The room was silent as the entries were read out, with some very positive results and some good critiques too. I particularly liked submission 3, The Trouble With Men and a later submission (I didn’t catch the title) about an author and a rock star. I also really enjoyed being read to! Congratulations to all those who had the courage to take on Submission Island and those who members of the panel wanted to hear more about.

The panel and audience ponder a submission

Nina Bruhns then gave her plenary address, with lots of practical tips on how to manage things when writing gets tough – hang ten. Nina suggests ‘really torturing’ your characters (as a reader, this works – I was nearly doubled over as a character went through a number of awful situations, culminating in a determination to finish the book there and then). Nina also mentioned how she went travelling around W.A. and drove to Coral Bay (a good two day drive) – good on you!

Morning tea featured by now the usual scrumptious fare (with more delicious Booktopia cupcakes) and then it was time for breakout sessions. I chose to attend Getting Your Feet Wet: Blogging 101 by Sarah Wendell from Smart Bitches, Trashy Books. Sarah is not only smart, but hilarious and to the point. Plus, she knows stacks about social media platforms (not an expert, nobody is an expert). I loved her approach – down to earth and realistic. Plus, she has taken the time to work out how Facebook works in the background- until they change it again of course! She gave lots of practical ideas for Twitter, Facebook, linking, Pinterest, blogs – etc. I learnt so much – what’s good, what’s a waste of time/ money and how to separate personal lives and professional lives on the internet. (Sarah recommends separate accounts on separate browsers – simple, but effective). Social media policies, timing of Tweets/posts and why it’s not a good idea to schedule Tweets – it was all covered. I came away inspired and aching with laughter.

Lunch time and I was on the hunt for an ice cream, but ended up at the ocean instead. There was also a Ferris Wheel at a nearby park (covered with federal election advertising) which seemed to be popular with families as the sun came out – August was a rainy month in Perth.

It was soon time to go back inside for the afternoon breakout sessions and I attended How to Catch Flies with Laura Bradford. This was how to conduct yourself professionally as a writer (though I definitely think it applies to other occupations too). I then had a lovely chat with Nicole Flockton while downing a much needed Diet Coke from Rachael Johns and went to the final breakout session, Navigating the Choppy Waters of Online Reviews. This was a panel with Sarah Wendell of Smart Bitches, Trashy Books, Kat Mayo (Book Thingo) and Kate Cuthbert from Escape Publishing. I was a little nervous about attending this session as I blog reviews (but I try to be positive!), so sat at the back! I needn’t have worried. This session was so interesting and interactive; I think we could have gone on for hours. It covered hot topics such as should authors post reviews? (The room was divided on this one – please authors, whatever your choice, tell me what books you’re reading as I’ve found so many great new authors that way). How do you respond to a negative review – or should you respond at all? Sarah gave an excellent example of a book that was so bad it was awesome – and how sales soared after that review! One of the messages from Kate was to protect your author brand. If you make a mistake, apologise. I loved this session!

Then after a super short afternoon tea break, it was back to the ballroom for the last session. Kim Hudson spoke about fear, and then we had the wonderful launch for RWAus14 – Romance Rocks. This will be held in 7-10th August 2014 at Olympic Park (Homebush), Sydney. It looks super fun, with Cherry Adair and James Scott Bell already named as presenters. Nikki Logan then closed the conference and Anne Gracie led us in The Standups – recognising the achievements of the people in the room until everyone was standing. Such a lovely idea!

The conference was then over, but one last thing to be done – there were books to be had that the publishers didn’t want to lug back east. Like a kid in a candy store, I had a difficult time choosing but got several exciting titles to try. Thank you to Harlequin and Destiny Romance!

I’d really like to attend the conference next year; it was the most fun and happy conference I’ve ever been to. Well done to the organisers!