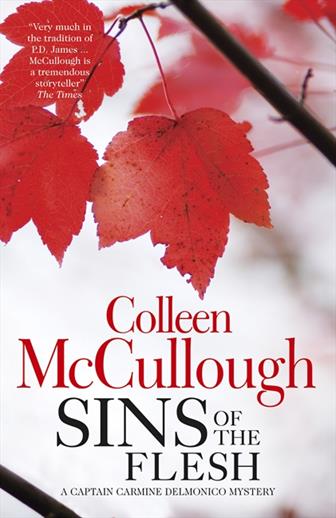 In brief: 1969 Holloman, Connecticut. Murders and missing women are taunting the detectives – can Carmine Delmonico and his team figure out these twisted events?

The good: More of Delia, the female detective with a heart of gold and an individual dress sense.

The not-so-good: Less of Carmine. Some of the attitudes of characters to homosexuality come as a shock to the modern reader.

Why I chose it: Have been reading the Carmine Delmonico novels since the first one (On, Off)

This is the fifth Carmine Delmonico detective novel that Colleen McCullough has written and I’ve read. Fans of her historical novels such as The Thorn Birds may be quite surprised at how different this series is. It’s brutal at times with attitudes that fit the 1960s setting and there’s no shortage of bodies on the streets of Holloman, Connecticut.

It’s somewhat appropriate to read Sins of the Flesh during a long, hot Australian summer because the book opens during a particular hot summer in Holloman, 1969. A man starved to death is found which sets off alarm bells for other men who have gone missing recently. Meanwhile, female detective Delia Carstairs is investigating a series of missing women and getting nowhere. How can a woman vanish and not be reported until months later?

It’s lucky for Delia that she’s made two new friends – Jess, a psychiatrist with a talent for brain mapping and Ivy, who runs part of her brother’s business. Both women have their own secrets – a reformed psychopath and a murky history. How will it all tie together?

For me, the star of this series has always been Carmine Delmonico, but Carmine is on holiday in California for a sizeable chunk of this book. While I enjoy Delia and her quirky dress sense (which is described at every opportunity), she doesn’t have as finely honed an eye for deduction as Carmine. The competing crimes of the men kidnapped and starved to death and the missing women made the action a little stop start for me. While the introduction of Delia’s friends was interesting, it was quite obvious that they were going to play a role as suspects. I was very interested in Jess and her rehabilitation of Walter, a psychopathic criminal as there was a lot of neuroscience explained well. Walter was probably the stand out character for me as he was fascinatingly repulsive in his actions but incredibly clever in the cunning execution of them. (I did love the way he called his new self the ‘iWalter’ – is this a sneaky dig at Apple?) I found the character of Jess more confusing as the book went on until I realised why she was so fascinated with Walter, as ultimately they shared a lot of the same traits. As for Ivy, although the reasons for her actions were explained, I didn’t feel they gave me a good answer as to ‘why’?

I should have known from previous Carmine Delmonico novels that the ‘why’ is not always explained in full. But in Sins of the Flesh, I found it frustrating as everyone had something to hide – but why didn’t Rha (Ivy’s brother) and Rufus help out the police when they recognised someone from a painting? After the suffering they had been through, why did they not want to help? Did they suspect who was killing the men and want to protect them? Why would they protect a murderer after their tragic life story? I would have liked these characters to be more fleshed out.

After all my questioning, I’ll keep reading the Carmine Delmonico series. The historical setting means that there’s more analysis and deduction of human character, which I enjoy. I’m just hoping to see more of Carmine and a more tightly woven plot next time.

9 thoughts on “Sins of the Flesh by Colleen McCullough”