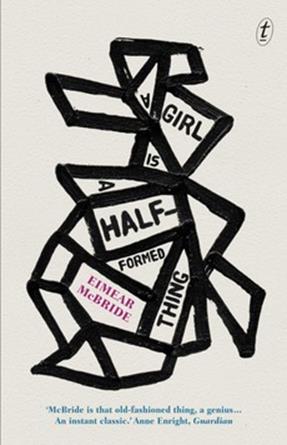 In brief: The story of a girl growing up and her fierce loyalty to her brother (who is in remission from a brain tumour). Tragic events unfold, leading to a personal struggle for sense in the world.

The good: Incredibly emotional and the images ‘pop’ into your head.

The not-so-good: A unique voice that can be difficult to understand at times and there’s some shocking scenes.

Why I chose it: On the Baileys Women’s Prize for Fiction longlist for 2014.

I should preface this review by saying that this book will not be for everyone. Written in a unique voice and style, A Girl is a Half-formed Thing is a stream of consciousness type novel of an unnamed first person protagonist. It’s not an easy read, as the sentence structure is sometimes fragmented and there are made-up words (which have a wonderful onomatopoeia quality to them). As the girl ages, things do become a little more coherent and conventional in terms of language – unless something awful is happening to her, which sadly is often in this book.

The storyline is quite simple – the story of the girl from before her birth (significant as her beloved brother had a brain tumour before she was born) to early adulthood. However, it’s what happens during these years that will shock you. Her household is very religious and her mother beats her children and threatens them during their youth. Then there’s an emotional upheaval where the family moves house, followed by the children meeting their aunt and uncle. For our protagonist, this changes her life course and sets her up for many meaningless sexual encounters and an awkward, unhealthy relationship.

In between all these harrowing events, the reader finds out how much the protagonist loves her brother. After his brain tumour, he’s left with an impressive scar and some intellectual impairment – he studies as hard as he can for hours and hours, but only sometimes passes. She protects him best she can, but doesn’t always succeed. Although she loves him, she finds it frustrating to have to look out for him and act as a go-between for him and their mother. She eventually moves away for college, where her brother proves his devotion and she the strength of her love, in harrowing circumstances.

This book is incredibly emotional – there are some parts that are distinctly uncomfortable to read because of the raw, brutal feelings and experiences that are being expressed by the protagonist. It’s quite sickening to think of these things happening to anyone, but when you’re reading about it happening to the main character, it’s almost unbearable. McBride conveys a feeling of reality as our protagonist is trying to block it all out, shown in the way her language starts to fragment and run wild, to focus on anything but what is actually happening to her.

The final section, which focuses on a tragic event involving the whole family, is packed full of emotion. Each person is doing what they think best, which happens to be at cross-purposes to what others think is right. There are tense scenes and things become much more complicated for our protagonist as everyone seems to be using her in some way, but she doesn’t seek help. Like the rest of the book, this part is very dark. It’s not a happy novel.

So why read it if it’s not conventionally structured or happy? I found once I got into the flow of the girl’s language, the whole scene just ‘popped’ into my head – the imagery was stunning. Plus, it’s a book that remained with me long after I closed it – I was thinking about our unnamed girl and her family and what might have been. The way A Girl is a Half-formed Thing makes the reader feel is second to none. It’s very, very powerful in creating strong reactions and emotions to the events that occur.