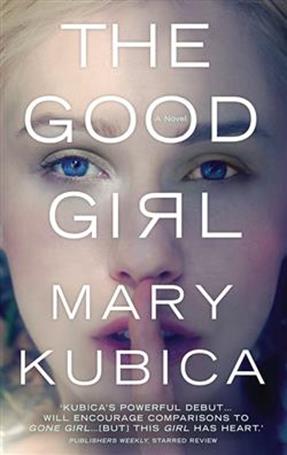 In brief: Mia has been kidnapped, but things don’t go as planned. What really happened to Mia in that tiny cabin and will her family be destroyed in trying to find out?

The good: I liked the way it was told in before/after sections – it really gave a feel for the impact of Mia’s disappearance on her mother and the police.

The not-so-good: I couldn’t quite connect with Mia, so I don’t think I felt for her as much as I could have.

Why I chose it: Looked good – thanks to Harlequin Australia for the ARC.

Like a significant proportion of the reading population, I really enjoyed Gone Girl. Like many others, I’ve been searching for a book that will have the compulsive, greedy reading feel to it and have eagerly grabbed several books that liken themselves to it. The Good Girl is one of those books. While I didn’t find it gave me the same ‘OMG-can’t-believe-this’ rush as Gone Girl, The Good Girl holds its own to be a solid, if uneasy thriller. Why uneasy? I found that main character, the said good girl Mia, made me uncomfortable. I didn’t particularly like her even though I felt sorry for her kidnapping ordeal. She seemed a little too ‘good’, even though she was portrayed by her father as unpredictable and unreliable.

The story of Mia’s kidnapping is told in a ‘before and after’ fashion – from before she was discovered by the police and after this event. The telling of the story is by people other than Mia – Gabe the detective in charge of her case, Mia’s mother and her kidnapper, Colin. It made it a bit difficult to get to know Mia as her actions and supposed thoughts are always filtered through others. The before and after chapters set up many questions in your head though – why does Mia only answer to Chloe now? Exactly what happened between Mia and Colin? Why doesn’t Mia know what people are talking about when Colin is mentioned? Is the Dennett family really as perfect as they say?

I found the most likeable character in the book to be Gabe, the detective. Not only does he go out of his way to update Mia’s mother, Eve (some would say it’s a bit beyond the limits of duty), he’s a good guy. Once Colin’s identity is discovered, Gabe helps Colin’s sick mum out, ensuring she’s cared for and even visiting her. Gabe would also like to give Mia’s dad, Judge Dennett, a piece of his mind for his disdain for his daughter, but keeps it under wraps. I found I looked forward to Gabe’s chapters most. Eve’s were that of a worried mum and later a worried mum realising the most dreaded conclusion, at a loss to try and help her daughter. I felt sorry for Eve initially, but she showed great amounts of strength to stick to her guns and care for a Mia that barely knew who she was. Colin was another kettle of fish – I didn’t particularly like or dislike him. He had a difficult upbringing but I didn’t feel sorry for him – he knew what kind of people he was working for and willingly did it, even if the money was to benefit his mother. His actions were confusing to me – help Mia, don’t help Mia, feel guilty, feel resentful, restart. As for what happened in the cabin, I found it a bit clichéd once it was fully revealed – yes, understandable according to psychology but not quite jaw droppingly OMG. I also wondered why the psychologist employed by the Dennetts didn’t think of what happened to Mia a little earlier (I don’t want to reveal the spoiler, but even the lay public know about this syndrome from TV). Was it because people were wrapped up in the amnesia? Maybe. Anyway, it made the guessing of what happened more of an adventure.

As for the ending, well – I didn’t expect that! It was a very clever way to finish – an excellent end to Kubica’s debut. I was left questioning more Mia’s intent and whether perhaps her father knew her better than everyone thought…

This is a solid debut by Kubica and I suspect she’s got more twisty thrillers up her sleeve. I’ll be reading the next one to see if there’s more moments like the ending.

4 thoughts on “The Good Girl by Mary Kubica”