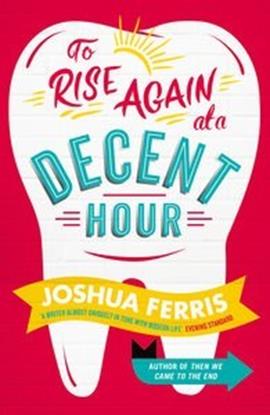 In brief: Paul, a dentist, is muddling along in his 5-chair practice and failed love affairs. Then someone begins to impersonate him on the internet, making Paul ask bigger questions…

The good: It’s well written and will encourage you to visit the dentist sooner rather than later.

The not-so-good: The book took a sharp turn into the meaning of religion and belief and lost some of the comedy of the earlier pages.

Before I say anything too involved about To Rise Again at a Decent Hour, I need to warn you that it’s a good idea that you’ve had a recent dental check-up first. Why? Because you’ll be squirming in your seat feeling terribly guilty after the first few pages if you haven’t, then will starting worrying about all the calamities about to befall you and your teeth. Fortuitously, I started this only hours after visiting the dentist (no coincidence, I’d finished my previous book and had less than 48 hours on my loan of this one). So while I wasn’t comfortable learning about the ways my teeth can die a horrible death, I could feel smug in my knowledge that I’m one of the people who look after their teeth – this is how Paul, the protagonist defines his clients.

Paul’s a dentist. I can’t say that I recall reading a book about dentists before, but I hope my dentist isn’t as neurotic as Paul is. Paul’s reached the epitome of dentistry success – he has a 5-chair practice (with no internal office) in Manhattan, a top notch hygienist to juggle the patients, a silent assistant and his ex-girlfriend as office manager. That’s where the cracks in Paul’s life start to appear. He’s middle aged, single and has a string of failed relationships, most recently with Connie. I’m not sure why she puts up working with him, as Paul is grumpy, intrusive and insecure. He’s searching for meaning in his life and has a deep fascination with religion (Connie is Jewish, his college girlfriend Catholic) although he’s an atheist. Paul is fascinated by baseball, following an intricate list of superstitions to ensure his team (Boston Red Sox) win – don’t watch the sixth inning, record every game on VHS… Paul is also determined that he won’t have an online presence. So when a website for his practice appears, followed by a Twitter account and Facebook page, nobody is more surprised than him – because he’s not the author. At first Paul is outraged, then as the mysterious online identity reveals Paul to be part of an ancient religion of doubted, Paul is intrigued and accepting.

I really enjoyed the first part of the novel. It’s witty and cynical, but not enough to turn the reader completely off Paul as a character. He’s a hypocrite, bemoaning everyone attached to their smartphones or ‘me-machines’ as he calls them and then incessantly checking for updates on himself. Paul’s lack of direction in terms of where his life is ‘going’ is quite funny to read as he gets in curly conversations with his hygienist and Connie, not to mention how he interprets the silent stares of his assistant. But as the novel got deeper into religion, my mind tended to wander, bringing back memories of Religious Education at school. Chunks of the dialogue had a textbook feel, rather than the sharply balanced wit of Paul previously. I found myself skimming over these – I’d prefer Paul’s long observation on Connie applying hand lotion than this. I know Paul’s searching for meaning, that he wants to belong and have a deeper relationship with someone/something, but this didn’t do it for me. The cloak and dagger technique of how the group brought Paul to their notice was weird and Paul’s acceptance of it was even stranger.

Don’t get me wrong – the book is a technical masterpiece. The language is brilliant, the story bustles along and Paul is a likeable character. I think I misled myself, thinking it would be about identity theft and crazy dentist stories rather than a search for self. I’d read Ferris again, but I think I’d do more research first to find what the book is really about and whether that’s my thing.