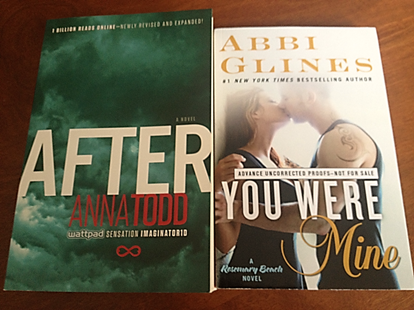 I’m at the point where I’m losing track of the days and dates at the moment! Life is good, but busy – I’ve had to finally resort to using the Outlook calendar to tell me where I should be and what I should be doing. (I’m sure most of you would have been doing this for years, but I never wanted to rely on a computer to tell me if I was free or busy. Now, I love that it tells me a new invite means clashing appointments when I haven’t even read what the meeting is about!) In the midst of digital calendars and the helpful reminder ping, it’s nice to be able to rely on a good ol’ paper book. It’s not going to ding, flash up new emails or ask me for feedback.

Although, the first book below (all from Simon & Schuster), was discovered online. After by Anna Todd was originally a fan fiction read on Wattpad, now’s it’s been edited and features original characters Tess and Hardin in a twisted relationship that Tessa can’t escape from – but why? Could this be love for the first time? I had fallen off the fan fiction bandwagon after finishing my undergrad studies, but this book sounds like the type of stories I couldn’t get enough of. The other book is Abbi Glines’ You Were Mine, part of the Rosemary Beach series. This story is about a summer romance between Tripp and Bethy that Tripp can’t forget. Eight years later, Tripp returns to find his cousin Jace had made Bethy his own – but what’s the catch? Keen readers will know the background to these people – the book is out December 2nd and there seems to be a lot of buzz from fans!

I also managed to hunt down two books that have been on my radar. The first was John Cleese’s memoir, So, Anyway… (please note the feathers, likely from a Norwegian Blue) which I am hugely excited to read because:

I’d also been thinking about Alice Clayton’s books and how funny they are. Just past John Cleese was Rusty Nailed, which continues the story of Caroline and Simon of Wallbanger fame as the bedhead gets less of a bashing when reality sets in for the couple. Is this going to be happily ever after, or is real life closing in?

Do stop in at the Mailbox Monday blog for links to everyone’s mailbox goodies. Overseen by Vicki (I’d Rather Be at the Beach), Leslie (Under My Apple Tree) and Serena (Savvy Verse & Wit), I’m sure you’ll find something you want to read, as well as more great books!