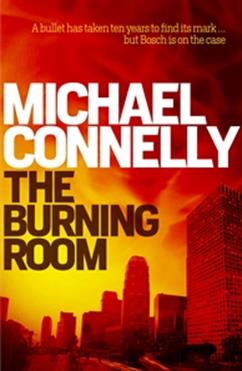 In brief: Harry Bosch returns to solve a cold murder case ten years in the making with his new partner, ‘Lucky’ Lucia Soto.

The not-so-good: The ending! What’s next for Harry?

Why I chose it: Thank you to Allen & Unwin and The Reading Room for the ARC – I’ve since raided the library for more Harry Bosch books.

Sometimes, I feel just in the right mood for a good crime novel. (That’s not to say that I feel like committing a crime or am homicidal, I just like to read about things darker than my everyday life). Knowing that Michael Connelly is a stellar author, I decided it was time for me to make my acquaintance with Detective Harry Bosch. Harry, I feel like we are going to be very good friends after reading The Burning Room. Your world of cops and corruption has everything I’m looking for in a crime novel – hairpin twists, a plot that’s realistic yet impossible to predict and characters that are whole, rather than a cut out. After reading The Burning Room, I immediately went out and searched for more Harry Bosch. You see, while Harry is still a guy under his excellent detective skills (meaning there’s a few old flames mentioned), he’s not the stereotypical crime fighter who is lonely, bitter and jaded. Rather the opposite. Harry takes good care of his daughter, trying to ensure he’s home to see her. He also doesn’t make a pass at any woman nearby. Harry is one classy detective.

The Burning Room is the nineteenth story in the Harry Bosch series, but it shows no signs of being dated. It’s also exceptionally easy for new readers to become engrossed in the book without feeling like they should have read the other eighteen books first. Harry has been teamed up with a new, younger partner in ‘Lucky’ Lucia Soto. Lucy is a former uniformed policewoman who managed to take out a few criminals in a confrontation gone wrong, hence the nickname. Harry’s been paired with her to show her the ropes and pass on some skills before his short-term deferred retirement contract ends. At first, Lucy seems a little eager and error prone and Bosch wonders what’s up with her. What habit is she trying to hide? When it’s revealed, Harry realises he’s underestimated Lucy and their partnership becomes stronger as they work together on not one, but two cold cases. The first is a murder that took ten years to happen. (Yes, ten years). A man who was shot and a bullet lodged in his spine dies from related causes. The original shooting was never solved, so it’s up to Harry and Lucy as the media demand answers. The second case is just as yet, but even more complex…

Both cases were fascinating to read about – they were unique enough to hold my interest, yet were plausible enough to have happened. The twists were impossible to see coming and Harry and Lucy didn’t have any incredible light bulb moments that seemed contrived. The plot felt very real, from Harry’s bemoaning of the loss of traditional journalism to the amount of policing done behind a desk. That’s one of the things I enjoyed most about The Burning Room. The second were the characters. All of them, including the minor characters were properly fleshed out, making them easily distinguishable in my mind and interesting to read about. That Harry and Lucy weren’t stereotypical detectives was the icing on the cake – they were real people, from their coffee habits to Harry’s weary distaste for elements of the police system. I thought Lucy was a great new character – she’s a rookie, but she’s not stupid by any means. She also wasn’t distinguished by her looks, but rather her multiple talents.

While The Burning Room has some moments of violence, it wasn’t gory or dragged out, nor was it gratuitous. I greatly appreciated this – I really don’t want to read about prolonged, agony filled deaths and maimings if I can help it. It’s obvious that Michael Connelly can tell a fine story without resorting to cheap tricks.

With a gasp at the ending, I had to take my leave of Detective Harry Bosch. I promise you, Harry, that it won’t be the last time we meet. I look forward to reading more of your adventures very soon.

2 thoughts on “The Burning Room by Michael Connelly”