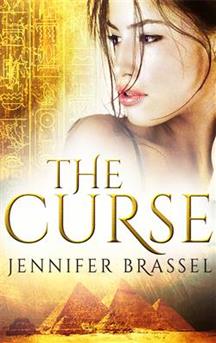 In brief: Seth is a descendent of Egyptian royalty, but his family has been broken by a curse over generations. Can Julia, his true love, help him break it or will her stalker finally take action? (More about the plot here).

Why I chose it: Thanks to Escape Publishing; I’ll also be meeting Jennifer Brassel at ARRC15.

Reading books with a paranormal element is a bit out of my comfort zone (perhaps Twilight scarred me a bit too much), but with The Curse being shortlisted for Favourite Paranormal Romance in the annual Australian Romance Readers Awards, I decided to give it a go. I’m glad I did – the story was intriguing, with a number of twists and a big finale.

The Curse combines romantic elements with action in addition to exploring the idea of a curse that has haunted a family for centuries. Seth is a banker, but he knows from his grandfather that when he finds his true love, she’ll be taken from him in a horrifying way. This is what happened when his Egyptian ancestor fell in love with a slave girl and it’s happened in every generation since. Seth is determined to break the curse and has a crack team of security at hand. Julia is a painter who left Australia hurriedly after a stalker invaded her privacy. She changed her name and moved to Boston to escape. But she’s strangely drawn to an Egyptian exhibition and paints the best work of her life of the pharaoh Tuthmosis. She then starts having dreams about the pharaoh and gradually finds herself present in them. Once she meets Seth and falls in love, the dreams intensify. Seth is worried when she tells him and he tells her about the curse. Julia’s not sure about it, but meanwhile her enemies are closing in to destroy her – just as they have many lives again.

The Curse is a fascinating premise in looking at reincarnation and rebirth across the ages. The tone of the story changes from light and sweet to something darker as those out to destroy Julia and Seth’s happiness come out of hiding. Seth is a strong character and remarkably sensible for someone who knows that his beloved will be killed – it’s just a matter of when. He’s also very calm, yet exceptionally protective of Julia (as you would expect). Julia grew on me as I found out more about her past. I loved her Major Mitchell cockatoo, Bird, who provided some light relief as the story got darker. I would have liked to know more about the stalking in Australia and why her reaction was so strong to move hemispheres. The bad guys – well, they were suitably creepy and some hid their spots well.

I would have liked to know more about Julia and Seth’s past lives, but then again, that may have detracted from the action. The tension is super-strong as the bad guys pounce on Julia, and it was great that Seth didn’t lose his head, but called the police (he needs to give some lessons to thriller characters). This part was my favourite and would play well as a movie.

I found the epilogue a little out of pace with what had gone on before in the book, but it was nice to know (rather than assume) the happy ending.