Last weekend I attended my first Australian Romance Readers Convention (aka ARRC15) in Canberra. It was a fun time and I think I’m still recovering! I know there have been several blog posts on the convention so I’ll try not to rehash. I also had the opportunity to catch up with family plus hunt down some limited edition cosmetics that had sold out in Perth. I may have also had a splurge in Zara!

I stayed at the convention hotel, QT Canberra. I was a bit iffy about staying there as I’d stayed there some years ago and had a major issue with them double charging my credit card, which took several months to fix. Fortunately this time, that didn’t happen. The hotel is done as a funky political theme (Canberra being the home of Australian parliament). The room was comfy, boasting a Nespresso machine and T2 tea – but getting these topped up was a major hassle. Two English Breakfast tea bags over a 5 day stay are ridiculous, and calling housekeeping didn’t help. The minibar in my room was also mainly out of date (like mid-2014 expiry). The balcony was great though and we got to see balloons!

Dinner in the Capitol Bar and Grill was lovely. It’s not cheap, but having a Priority Rewards card does help to reduce the cost. I also ate at Jamie’s Italian while in Canberra, which was delicious (and the service beats Perth a zillion times over). 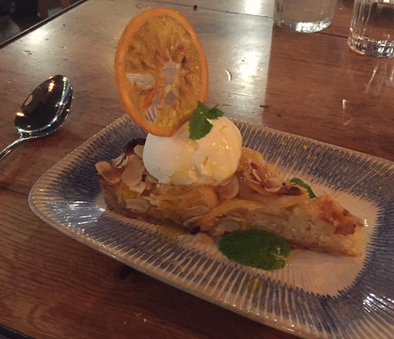 But you don’t want to know about Canberra shopping and food, do you? You want to know about the conference. I’m completely romanced out after this, which gives you an indication of how much fun it was! Things started on the Friday night with a welcome reception, where I got to meet a lot of great people, readers and authors alike. (Hello to Danielle, Adele, Maggie and Erin!) Then it was time for a quick dinner and back to trivia. I think trivia proved that I’m no hard-core romance reader (and that you shouldn’t wear heels when running may be involved). I didn’t know many answers at all!

Soon it was Saturday morning, time for bed and then to get up for the conference proper. First up was the wonderful Helene Young, who was inspiring as she told of her journey to doing what she wanted to do. (She also had excellent video clips, which reminds me that I must get out my Bridget Jones’ Diary DVD and book one day soon). Helene is also a pilot and kindly answered questions about engine failure as well as my own later about luggage allowance (thanks Captain Young – crisis averted, books made it home safely). Then Rachael Johns officially launched her new book, The Road to Hope, which is a sequel to Jilted. Then, a final book launch – Tribal Law by Shannon Curtis, based on ARRA reader focus groups (some of the things that didn’t make it in…wow. What’s this about dentists? Could they be the next popular hero?). 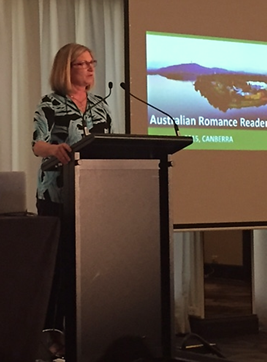 Helene Young – such an interesting speaker (and author, and pilot!) 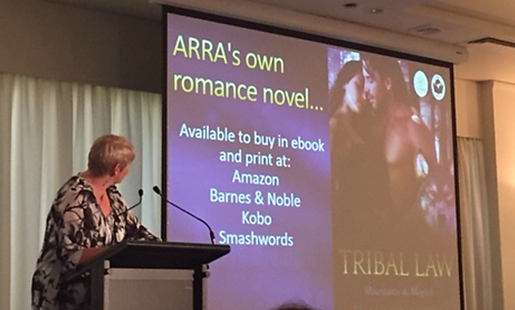 Morning tea and time for the trade exhibitions. I got to meet the lovely ladies from Destiny Romance and also the brave boys from Booktopia (I say brave because the men were severely outnumbered). I think I may have asked them if I could be locked in the warehouse overnight! Harlequin also had a drool-worthy stand and eXtasy Books had fun stuff too. In between food (thanks for the Maltesers Booktopia), it was time to get ready for the concurrent sessions.

I think there was something for everyone in these sessions. I certainly had a hard time choosing! Naturally I attended rural romance in the form of Red Dust Heroes (with my fave authors Alissa Callen, Cathryn Hein, Lisa Ireland and Rachael Johns, plus Cathryn’s horse – do look at Cathryn’s blog if you want to know what on earth I’m talking about!). I also wanted to learn more about category romance, attending two sessions related to it. Kat from BookThingo did a great job of moderating a session with Kandy Shepherd, Melanie Milburne, Michelle Douglas and Rachel Bailey. I also attended a session on moving to single title from category with Amy Andrews, Fiona Lowe, Fiona McArthur and Trish Morey. (Trish had a Haigh’s bag as a prize! Oh, and it was really interesting to hear if having many category titles written gives you a head start in single title – the answer is not really). I also did some author speed dating and got to spend time with the awesome-sauce Victoria Dahl (complete with husky voice) and Sarah Mayberry! (I’m sorry for shocking you Victoria with my story of the Looking for Trouble audiobook and the carpark attendant. He still doesn’t look me in the eye). I attended a session about romance with magical elements, be it witches, curses or spells (thanks for increasing my book wish lists Jane Tara, Dani Kristoff and Jennifer Brassel!) and another session on small towns and their allure.

One of the highlights was attending a bloggers roundtable organised by BookThingo. It was wonderful to meet people whose blog posts I eagerly read! It was a great discussion and I am so relieved that my Net Galley percentage isn’t that bad after all! I found it really inspiring because blogging can be a bit lonely at times – you versus a computer, friends that don’t get it etc. but I loved this. It’s definitely inspired me to sit in front of the computer this morning.

A quick break and it was time for the book signing – it was huge! I got to meet the lovely Margareta Osborn, who signed my copy of Rose River as well as chat with some of my other fave authors (those I missed…sorry, my voice was running out!) I had so much fun; I completely forgot that I had a signing booklet!

After a tiring day, it was time to perk up for some more fun with the Awards Dinner. Because I had an extreme fear of overweight luggage, I didn’t dress up as much as others (the bling off needed sunglasses) but a good time was had by all. I met some great people at dinner, chatted loads, was on a winning table (go Rachael Johns for sexiest hero Adam from Outback Ghost) and got a delicious dessert. Sunday morning, and time for bed again!

It was worth the few hours sleep to hear Victoria Dahl speak. I want to be her when I grow up (obviously I am not grown up because I don’t have a signature eyeshadow colour yet!). It was a perfect speech for International Women’s Day, about unsympathetic heroines and how they deserve the good stuff too. 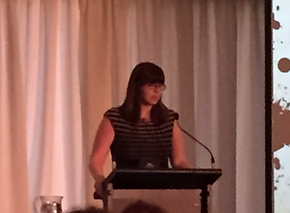 All this left me with a book wish list that probably breaks height clearances for aircraft! I did manage to come home under luggage allowance but also with some wonderful books – stay tuned for tomorrow’s Mailbox Monday, the ARRC edition. There were so many more I could have bought (and probably would have if I’d been at home because I could have brought a ute) but I need to leave something to look forward to. I had a great time. Would I attend again? Well, if the planetary forces of leave from work, someone to look after the family and preferably direct flights combine (I don’t like having transit in Melbourne because I DIDN’T HAVE TIME TO GO TO HAIGH’S/ZUMBO/READER’S FEAST/EMPORIUM etc.) I will certainly try.