Today I’d like to welcome Jenn J McLeod, author of the new novel Season of Shadow and Light (it’s her third novel but shamefully for me, the first I’ve read!) Jenn is currently touring around Australia, so I thought I’d ask her about her life on the road and the best parts! Thanks for answering all my nosy questions Jenn!

Well, my gypsy life is both in its early days and thirty years late!

Thirty years ago was the first time I ‘took off’ around Australia in a converted Ford F100 with a tent. And when I say I took off, I mean I ran away in search of . . . something. And as Banjo says in Season of Shadow and Light: ‘We’re all lookin’ for somethin’, girlie, but as I always say it’s what we do when we find it that’s most important.’ I was searching for something—not sure what—but at that time I was young, confused. (My mother would say ‘complicated’!)

I’m not sure I found anything on that trip at all, except that living in a tent can be really cold in the desert. After two years touring family illness forced a premature return home. I never did get back on the road.

The real life Banjo’s pub in Boonah (note the closed in balcony, Season of Shadow and Light readers!)

I am back on the road now; no longer running away, but running to all the places I missed on that first trip, starting in Queensland.

Although I wrote the early draft of this book while still in a house, Paige’s road trip in Season of Shadow and Light could be interpreted as slightly reminiscent—although I was much younger than Paige when I ran away, my husband was not cheating on me at the time, and I didn’t have a daughter! (Hmm, as you can see it doesn’t take much for a writer to take one or two elements from their life experiences to get the storytelling started!)

Paige’s road trip scenes in the opening chapters of the book (and Banjo’s pub in Coolabah Tree Gully) did come from a more recent trip I did to attend a fellow author’s book launch in Boonah. The quaint country atmosphere of Boonah, and neighbouring Kalbar, belies the towns’ closeness to Brisbane. Both these towns are at the heart of what’s called The Scenic Rim—a spectacular volcanic escarpment located in Queensland’s south-east region. (No one told me at the time there was a Scenic Rim historic pub trail!) And a big book lover bonus . . . The Story Tree, in Boonah, is a beaut little bookshop. Why? Because it has books AND serves coffee!

The road from NSW is over the ranges and steep and winding, so leave the caravan behind and do what I did; stay in a quintessential country pub, complete with crooked floors, then use it as a setting in a novel. Yes, it is the pub from Season of Shadow and Light. Best, most authentic country pub experience so far.

For some reason, maybe because I have lived in the town of the Big Banana—Coffs Harbour, NSW—for the last ten years, I am inexplicably drawn to places that claim to have “The biggest this” or “The smallest that” or those that are “The closest to” something-or-other. If you are like-wise compelled to experience such claims, you’ll have to try Toompine (70kms south of Quilpie, in QLD), which claims to be the only “pub without a town”. With a population of only two I’m guessing the Toompine Hotel (circa 1893) would make Friday night drinks a lot less crowded than what I’ve been used to.

Even less overwhelming, and up the road a bit, is Cheepie – Population: 1

At its peak, as a Cobb & Co change station, Cheepie had a police station, blacksmith, railway station, tent boarding houses, butcher shop, bakery and two organic vegetable gardens. All that remains in the township today is a private residence and one long-time resident. I reckon he’d have some stories to tell.

Finally, for a really great time (I’ve always wanted to say that!) you can experience time travel at Cameron’s Corner where you can be in three different time zones all at once— NSW, QLD, SA. That must make for a fun New Year’s Eve, if you are willing to brave the summer temperatures. Locals see in the New Year three times over. Does that mean three kisses at midnight?

Of course, before I set off on any of these adventures, I have a book to launch and a book tour to fit into the schedule. Life for me these days certainly reminds me of a favourite saying (one I managed to work into my new release):

There’ll be no stopping, just new friends. Please join me on my #WriteRoundOz odyssey, come home to the country and connect with me on: 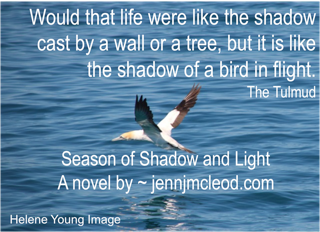 Thanks again Jenn! Please do drop in again this afternoon to read my review of Season of Shadow and Light. In the meantime, drop by some of my fellow blog tour participants: 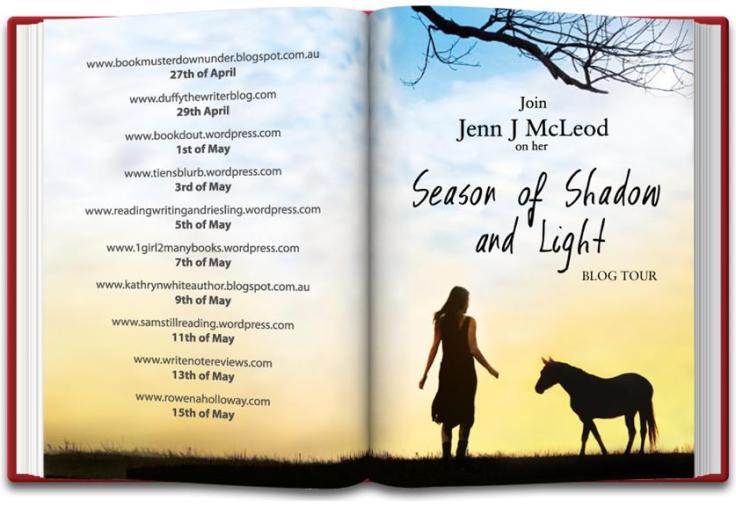 One thought on “Guest post: Jenn J McLeod, author of Season of Shadow and Light”