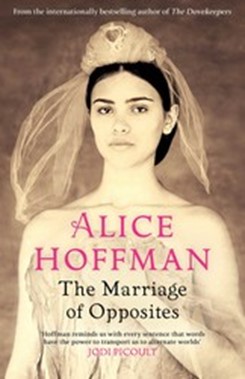 In brief: The story of Rachel Pomie, the mother of impressionist painter Camille Pissarro growing up on the small island of St Thomas.

The good: It’s real and not only is it incredibly interesting, it’s emotional and beautiful.

The not-so-good: Took me a little while to get engrossed in the story.

Why I chose it: Thank you to Simon & Schuster for the ARC.

Alice Hoffman is an author I’ve always been meaning to read, but even though I have at least one of her books on my bookshelf, I’ve never quite gotten around to reading her books. For shame! But I was intrigued by the interesting cover of The Marriage of Opposites and when I was kindly sent an ARC, so I thought it was time to seize the day. I wasn’t really sure what to expect, but it turned out to be a wonderful reading experience.

The Marriage of Opposites is a story about real people, where a story is spun around what is known of them. It’s about Camille Pissarro, a famous impressionist painter and his mother Rachel Pomie. I find that idea very cool – a famous person and their mother, who is not so famous. The first half of the book is about Rachel, following her from her teenage years to being a teen bride. She then finds herself stepmother and later mother to a number of children, before falling in love with Frederic, her nephew by marriage. Their union is marred by opposition from the community of St Thomas. She is defiant, living with Frederic before having his children and ultimately marrying. As Camille grows up, he has a talent for painting, but his mother is adamant that it is a waste of a career. Camille is just as stubborn and undertakes a number of journeys to establish himself as a painter, eventually finding love in France.

The fictional characters in the story are just as fascinating. Jestine is Rachel’s best friend and the daughter of her parents’ housekeeper. Jestine is deeply in love with Rachel’s cousin and he is sent to France when it’s discovered that she’s pregnant. He later returns with his wife and the couple decide to take his and Jestine’s daughter, Lyddie, back to France. It’s only when Lydia grows up that she finds out she is not her mother’s daughter, but part African. The ramifications in 1800s Paris are great and she and her family are shunned. This was a shocking part of the narrative for me, revealing how important the ‘right’ religion and race were to so many people. Thank goodness for the Pissarros, who were much more tolerant. (Although Rachel is shocked when Camille marries her maid – it’s something she just cannot get over. One of the funnier and strangely sad moments of the book is when she and Justine devise a plan to see Rachel’s granddaughter while her parents are out).

The interactions between characters are also brilliantly done. I cringed every time Rachel and her mother had a conversation because you just knew it would end up in an argument. Similarly, Camille and Rachel would also spark off each other, then Rachel would ruminate that she was turning into her mother. Knowing Rachel as she grew up, where she was so careful to honour the spirit of her first husband’s late wife, it was in contrast to the gentle girl of before. It made me wonder about how the bitterness between the Jewish community and her and Frederic changed her.

I wasn’t familiar with St Thomas before reading this book, but Alice Hoffman has brought this tropical island to vivid, colourful life on the page. You can almost feel the humidity and warmth radiating off as you read about tropical fruit and plants. The way the characters integrate with the setting is also brilliantly done. Rachel longs to see Paris (she’s even studied her father’s maps) but it’s clear she’s also in love with the island too. She lives and breathes it, delighting in business in what was her father’s store. Jestine is the same – she takes plants to dye cloth for wonderful dresses for the rich ladies of St Thomas.

This book did take me a little to get into – I found the story of Rachel’s early life quite separate from what came next. I wasn’t sure where it was going, but I persevered and was rewarded with an interesting story about family relationships intertwined with history.

2 thoughts on “The Marriage of Opposites by Alice Hoffman”