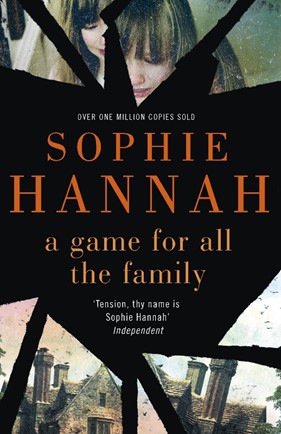 In brief: Justine has moved from London to do Nothing. But when her daughter tells her that her best friend George has been expelled from school wrongfully, Justine is determined to fight. Things start to go pear-shaped when she’s told George doesn’t exist and the threatening phone calls start…

The good: Absolutely unputdownable – you’ll be wondering how Justine and her family will get out of this unscathed.

The not-so-good: The ending was right in that I couldn’t see any other way to resolve the story, but it left me a little flat.

Why I chose it: Sophie Hannah’s stories are always gripping. Thanks Hachette Australia for the copy.

I really think Sophie Hannah is underrated in Australia – we need to scream from the rooftops that she is a bloody brilliant writer! Plus, she writes suspense (often from the victim’s point of view) like nobody else. It’s taut, domestic terror that I can never see coming. A Game for all the Family is no exception – it’s creepy, crazy and more than a little bit scary. In between, it’s a novel of family and new directions in life. It’s a standalone thriller – no mention of the Spilling CID detectives but it’s up there with her best.

The story is told from the first person point of view of Justine. Justine, her husband Alex and daughter Ellen are moving to Devon from London. Justine’s left her job and she is incredibly happy about it. Her plan is to do Nothing and revel in it. We get the idea that Justine’s job ended with kind of a bang, but she’s not willing to divulge. But on the way to their new life, Justine gets a strange, premonition like feeling about a little house next to the motorway. One day she will be happy to live there – but why? Not long after the family settle in Devon, strange things start happening. Ellen becomes withdrawn and confesses that her best friend George has been expelled from school. Justine’s aghast and thunders up to the school, only to be told that George doesn’t exist. Then she starts getting phone calls from a woman telling her to leave Devon otherwise she’ll be forced to kill them all…

Meanwhile, Ellen is writing a story for school about a family that just happens to live in their house – and commit a few murders. This understandably freaks Justine out – is it a parallel? Is Ellen making it up? What is truth and what is fiction?

Naturally, the truth is going to be stranger than anything you can imagine and it’s a scarily fun ride getting there. Justine tells her side of the story, followed at the end of the chapter by the next section of Ellen’s story. Ellen’s story is brilliant, I loved the teenage, honest tone of it. The content is freakishly odd though and it takes some time to see how the story and the family’s current dramas are going to come together. Justine is a pretty honest character. She’s not backwards in coming forwards and making an almighty stir or doing some detective work. She’s a bit unpredictable in that sense and it did make me second guess her as a reliable narrator. I do have faith in Sophie Hannah’s ability in creating a twisted tale, so I was hoping that she wouldn’t pull that trick (thankfully, I was right). The plot gets stranger and stranger until you have to stop guessing and run with it. It’s a wild ride, and a fairly satisfying one. The finale, while appropriate, was a little bit neat for me. But if you asked me how else the story could be completed, I couldn’t answer you. It just goes to show that you never really know the full extent of a character or two! And given that all the characters in A Game for all the Family are quirky and flawed, there are plenty of surprises.

Incredibly twisted yet satisfying, this novel shows that Sophie Hannah has the skills and talent to pull off the craziest of situations and make it compulsive reading.