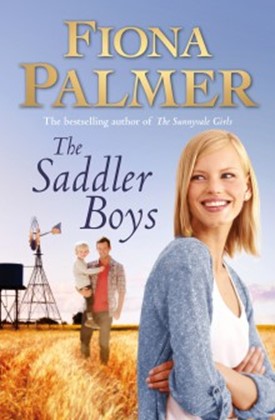 In brief: Natalie is a new teacher in the tiny town of Biddy Creek. Away from her privileged life in the city, it’s a whole new world as she gets to know the locals and farming. Will she fall in love with the bush?

The good: Gets very exciting!

The not-so-good: Nat was a bit of an over enthusiastic person at first.

Why I chose it: Enjoy Fiona Palmer’s books. Thanks Penguin Australia for the eARC.

I love the cover of The Saddler Boys – it’s so sunny and spring-like! I couldn’t wait to delve into the latest book by Fiona Palmer, a fellow West Australian who writes rural fiction set mainly in the Wheatbelt. It’s a fish-out-of-water story that balances the sweet with the sinister nicely.

The main character of the story is Natalie, a graduate teacher who has received her first teaching position in the small town of Lake Biddy. Natalie is excited to go, but her well off family is reluctant to see her leave. She’s just fallen in love with the son of a family friend and her mother is thrilled at the potential joining of the two families. Gary, her boyfriend, isn’t too happy to see her leave but Nat is determined to have a year of independence. With her immaculate clothes and fancy car, Lake Biddy isn’t too sure what to make of the new teacher. But Nat is dedicated and open to trying new things in the small town, so she is welcomed with open arms. She learns about shearing, Bogan Bingo and life on the land but it’s the Saddler boys who become her closest friends. Drew is a single father and Billy is a unique little boy. But when the school is threatened with closure and both Nat and Drew’s lives take a darker turn, can they both come out the other side?

I’ve got to say that I didn’t really like Natalie at first. She looks perfect, she has the perfect rich life and she was always working on stuff for school. She was a little bit over the top in her dedication to the school (especially compared with the teachers I know)! Fortunately, as the story went on she became more of a real, flawed person and I grew to like her. Drew, the hero, was a nice combination of hard work, difficult past and honesty. He wasn’t afraid to be in touch with his feelings (especially when it came to showing his love for Billy) and to try and help Nat out when she needed it. Billy was cute too and I can see why Nat had a soft spot for him.

Another great thing about The Saddler Boys was that it wasn’t solely a romance story. There was drama with the townspeople fighting against the school closure and real tension with Nat’s secret predicament and Drew’s anguish at events that happen later in the book. (I’m not giving more away here – suffice to say that it was gripping). Each of these plot threads were interwoven well throughout the main story with some great scenes – from the kids meeting politicians in the city to Nat’s uncle (who is super cool and clever). The story also emphatically demonstrates the sense of community and kinship that there is in small towns – everyone has your back when you’re in need.

If you normally dismiss rural fiction, I’d suggest giving this a try. It has a nice dose of city life for those who need, plus having the new teacher as the main character gives a fresh aspect. It’s a light and fun read that celebrates the best of country life.

3 thoughts on “The Saddler Boys by Fiona Palmer”