It rained on the weekend! So nice to have a change of weather – it would have been perfect for reading, but it wasn’t to be as I was working. So all I got was occasional glances out the window. But I did have a good reading week in between it all. I was lucky enough to receive these three books in the mail: 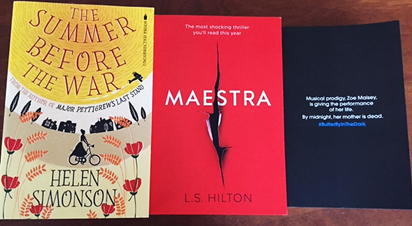 The Summer Before the War by Helen Simonson was a win from Allen & Unwin and Goodreads. Released in March, it’s set in 1914 and follows Agatha (who is sure her husband won’t let things end up in war) and Beatrice, a free-thinking Latin teacher. As things start to improve for Beatrice, war looms and the old ways will be changed forever.

Maestra by L.S. Hilton was also from Allen & Unwin and The Reading Room. I’ve been hearing a lot about this thriller which promises to be like nothing else I’ve ever read. It involves conspiracy, wealth and a determined woman. The cover is especially intriguing. It’s released in March too.

The Perfect Girl by Gilly Macmillan (formerly known as The Butterfly in the Dark) is about Zoe Maisey, who even though she’s a child genius was involved in the death of three teenagers. Some time later, she’s giving a performance – but her mother will be dead by the end of it. Thanks to Hachette and The Reading Room for this March release.

As for my own purchases, I went to see the always funny David Sedaris last weekend. He was hilarious and I can never resist buying a book of his (Dress Your Family in Corduroy and Denim), having it signed and having a chat. (This time we talked about the annoyance of small talk, particularly the question ‘how was your flight?’). If you’re not familiar with his work, he writes essays on anything from family to holidays to the minute details of life.

I also lamented the how I couldn’t find Elena Ferrante’s other novels to buy on Twitter and was helped out by the very kind Emily, who set them aside for me. Now as you can see, I have all three in their lovely Text Publishing covers! The Lost Daughter is about Leda, a woman who takes a holiday alone but is confronted by the strange behaviour of a family which triggers memories of her own family. The Days of Abandonment starts as Olga’s husband announces his intention to leave her and she is forced to confront her past and accept her future. Troubling Love finds Delia on a voyage of discovery after her mother’s death regarding memory and family bonds.

If you want to check out more exciting bookshelves, do drop by the Mailbox Monday blog for links to everyone’s mailbox goodies. Overseen by Vicki (I’d Rather Be at the Beach), Leslie (Under My Apple Tree) and Serena (Savvy Verse & Wit), I’m sure you’ll find many books for the wish list!

It’s Monday! What are you reading? hosted by Book Date and formerly by Book Journey and J Kaye. Click on the pictures to read more about the books. 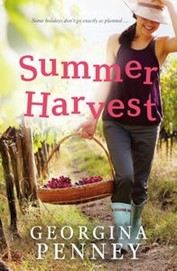 Have only just started the above, but I’m trying not to read another Elena Ferrante book straightaway!