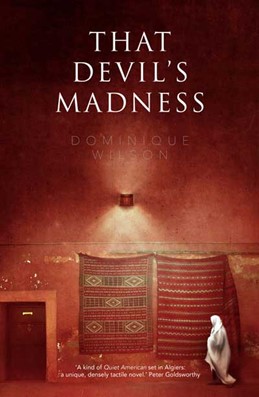 In brief: Nicolette’s grandfather and great-grandfather left France for Algeria for a better life. Many years later, the family left for Australia for the same reasons. Nicolette returns as a photojournalist to cover President Boumedienne’s last days, but the Algeria she knows has gone. She won’t accept the differences without a struggle.

The not-so-good: The ending! Didn’t see that coming!

Why I chose it: Thank you to Transit Lounge for the copy.

Confession time: I know very little about Algeria, besides some bits on TV and where to find it on a map. I like to learn more about places by reading (particularly fiction) so That Devil’s Madness intrigued me. I wasn’t expecting an incredibly good story that had me on the edge of my seat reading into the night. The story combines powerful emotion with history, loyalty and reflection on the past.

Initially the story begins in two separate narratives, linked by family. Louis is a boy leaving poverty in France for the wide expanses of Algeria with his father in 1896. Algeria is a whole new world with space, sand and opportunity. Louis and his father Marius set about building a farm and livelihood far away from the capital of Algiers. They become friends with the Berbers, a friendship that will last for generations until it is brutally severed in the unrest post World War II. It’s a fascinating story, filled with detail and politics that only become more complex as time goes on.

The second narrative opens in Australia in the late 1960s as Nicolette moves to the country with her husband and child. What happens next is brutal and shocking. Later, we meet her again as an emerging photojournalist, wanting to cover the illness of President Boumedienne in Algeria. Determined to do it, Nicolette takes her holiday leave and meets up with Steven, a friend of a colleague and experienced journalist. He’s there to stop Nicolette from making rookie mistakes and believing Algeria is the same place that she left as a child…but both of them are more than what they appear.

Eventually, the two narratives come together. I was sad to leave Louis’ story but Nicolette’s thread linked the missing pieces and explained why things had become what they did. The two narratives are expertly interwoven, Wilson has the knack of knowing at the right moment when to switch and when to offer a titbit from the past that explains why the modern characters are acting the way they do. As for the ending, it was shocking and unexpected to me but I really admire Wilson for doing what she did. That kind of explosive ending takes guts and resulted in the story packing an even greater punch in my memory. (While I say it was unexpected, it did fit in perfectly with how the characters were portrayed throughout the book. It fit in with their motives and added to the allure of Algeria as a place of where nothing is as it seems).

That Devil’s Madness is a captivating story that engaged me fully – the characters were intriguing and the story of Algeria fascinated me in a way that no history book does. It’s well written and definitely worth a read. I know literary fiction can sometimes be tainted with the ‘dull’ tag but this novel defies the stereotypes and combines skilled writing with a fast paced storyline that also reflects on history, religion, freedom and duty.

2 thoughts on “That Devil’s Madness by Dominique Wilson”