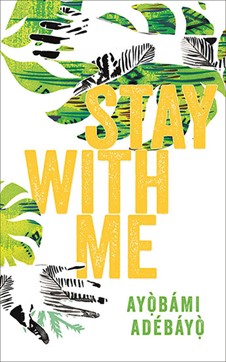 In brief: Yejide wants a child. So does her husband and his family. But she never expected Akin to agree to take a second wife, which starts to crack their own marriage.

The good: So many layers, secrets and emotion.

The not-so-good: This book creates a mighty book hangover.

Why I chose it: On the Bailey’s Prize longlist (and now shortlist). Thank you Allen & Unwin for the copy (complete with yellow page edges).

Stay With Me arrived shortly after the Baileys Prize longlist was announced and combined with its beautiful yellow edged pages, how could I say no to such a book? I’ve been wanting to expand my reading tastes and this book offered a great opportunity to travel to a place I haven’t been very often in books, Nigeria. I wasn’t expecting the power of emotion and explosion of secrets that repeatedly happened in Stay With Me – it’s a small book that packs multiple emotional punches. The storyline appears deceptively simple but there are so many layers and revelations to this story that you can’t help but be surprised and amazed.

The story is about a happily married couple in Nigeria, Yejide and Akin. Sure, they don’t have any children even though Yejide longs for a child, but it will happen. Right? Unfortunately Akin’s family are eager for him to pass on his genes and start a family and Yejide obviously isn’t the woman to do it. So they propose a second bride for Akin, Funmi. As the child of a father with multiple wives, Yejide is strongly against this. But Akin bows to his family and marries Funmi. It’s then that cracks in his marriage to Yejide begin to show, both little things and big things. There’s tragedy (almost of Shakespearean proportions), palpable pain and disbelief. Was their marriage doomed before this? How do you recover from grief and ridicule?

The story is told by both Yejide and Akin in the first person which gives the reader a deep insight into their psyche, both the good and bad. It’s interesting that to both Yejide and Akin, their partner presents completely differently in their eyes. Akin is capable of things that Yejide wouldn’t even dream of. Yet Yejide to Akin is someone to be babied, even pitied at times. Does that make for a happy marriage? Not really because the couple hide secrets from each other that only grow in proportion as time goes on and their lives become more complex. In the background, the Nigeria of the 1980s is mirroring the couple’s lives. The government is being overturned, sometimes there’s a coup (unsuccessful or otherwise). It makes it difficult to rely on the basic necessities like electricity – or your partner.

Ayobami Adebayo’s writing is clear and wreaks emotional havoc on the reader in its simplicity of describing the deepest of secrets as though they were the most casual of statements. I gasped out loud several times while reading Stay With Me because I did not see that twist coming or hints of that secret. The characters are complex (I still can’t decide if Akin is the sweet person he appears to everyone besides Yejide and possibly Funmi) and she definitely kills her darlings, making them all flawed to the point of unpleasantness. One thing I especially liked was that Funmi, who we’re meant to dislike because she’s trying to usurp Yejide, is actually quite horrible. It’s taking the expected and making it unexpected in this brilliantly crafted debut novel where nothing is as it appears.

I’m really excited to see Stay With Me on the shortlist for the Baileys Prize and I’d love it to go all the way. Such a great novel justifiably deserves more recognition.

4 thoughts on “Stay With Me by Ayobami Adebayo”