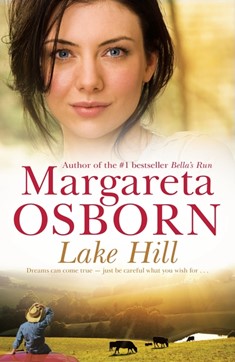 In brief: Julia’s decided to change her life and forget the past. But she finds herself in the mountains instead of at the beach, reuniting with her first love. It could be good – until her past catches up with her.

The good: Margareta Osborn’s books are always warm and inviting.

The not-so-good: I wish I had had more time to sit down and read this one!

Why I chose it: Enjoy Margareta’s books, so bought this as soon as it was released.

Margareta Osborn’s books are always brimming with love for the mountain country of Australia. Add to that a plot that takes you off the beaten track and you get Lake Hill. It is a fascinating story dealing with love, loss, family and secrets. What I particularly enjoyed about this story was that it didn’t have the romance as the main plotline and interwove stories from the other characters, making it all the richer.

Julia Gunn is finally free (although not by choice). She’s decided to quit her job and move away from Melbourne to open a café on the coast. Unfortunately a poorly timed rockslide has her car rendered useless and she’s stranded in the small mountain town of Lake Grace. The town also happens to be primarily owned by Rick Halloran, who was also Julia’s first love. Julia recognises him instantly, but Rick is slower to remember and then suspicious as to her reasons for being there. Is she a journalist only there to capitalise on his family’s fame? Julia’s definitely not in Lake Grace for a long stay – she wants to get going! But a gorgeous building by the lake has her changing her site for a café. As her relationship with Rick grows, Julia knows that there’s a secret she needs to reveal – until that secret appears in the flesh…

The community feeling of the small town of Lake Grace is palpable in this story, particularly in the beginning as most of the townspeople descend on the local pub to the bewilderment of Julia. She’s amazed at their familiarity, knowledge of each other and gentle teasing. The town is also willing to accept and support Julia once she makes the decision to open the café – all and sundry stop for a coffee and some even get behind the counter! It’s just what she needs as Julia is revealed to be a damaged character, suffering from bullying, humiliation and rejection throughout her life. She can’t even bear to show Rick the pain of her past, even when it’s in front of him! Even though she lacks self-confidence, Julia is stronger than she knows. As the community helps to build her business, she comes up against some odd scenarios that will draw on quick thinking and trusting in others.

Rick plays his cards much closer to his chest but it’s more obvious that he’s hiding something than Julia. He’s been hurt by his parents and fiercely overprotects his now adult sister. He wants to protect Julia in the same way, but she’s not keen as his protection can be overbearing. He’s more broody a hero, but it’s the townspeople’s trust in him that leads the reader to trust him too.

There are also some wonderful supporting characters in Lake Hill. Ernie, a retired doctor with a knack for scones, hides a secret too. There’s the lonely figure of Miss Finch, lost in another time and Montana, Rick’s sister, who is like a puppy, eager to try everything at least once. They are a disparate group, but they all work wonderfully when crisis arrives. The latter part of the story has so many twists and turns that they will need to draw on each other for strength. It’s overall an interesting story that’s both fun and eye opening.

One thought on “Lake Hill by Margareta Osborn”