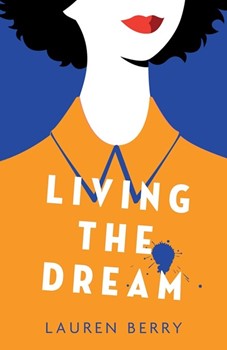 In brief: Clem and Emma aren’t exactly where they wanted to be at the end of their twenties. Still trying to chase their dream jobs and dream lives, will they ever make it or accept the status quo?

The good: Loads of fun and realistic!

The not-so-good: I devoured this in 24 hours.

Why I chose it: I love stories about young women in big cities with multiple dilemmas. Thanks to Hachette for the copy.

Stories about women trying to make every part of their lives great are my crack. Add in a big city (in this case London) and I’ll be champing at the bit to read it. Maybe it’s because I’ll still looking for a replacement for Sex and the City, maybe it’s that I relate to stories like this. If you’re looking for a fun read that describes the chaos of your late twenties, Living the Dream is a book you should read. It combines the humiliating with the serious, the fun with the hangovers. It doesn’t hold back!

The two main characters are Emma and Clementine (Clem). Best buddies, they’ve recently been separated while Clem completes a scholarship in New York for screenwriting. But when Clem returns to London, the friends compare where they’re ‘at’ in terms of careers and it’s not that good. Emma is still working at the advertising agency she hates, taking minutes and making PowerPoints. A temp job has termed into a permanent one and her boss thinks she has potential. Clem is flat broke, awaiting ‘the call’ to accept her script. She’s at home with her mum and stepfather, working at a bar to try to scramble some money to live on. Like Clem, Emma has a dream to be a writer. She writes a blog that tells the blunt truth of her life and pitches ideas to magazines with varying success. Can the girls let go of semi-stable, boring employment for something better or will their dreams remain untouchable?

In between work life, Emma and Clem get up to loads of fun. There’s a lot of drinking, a lot of fun nights out and the support of their other friends. The novel takes a serious turn towards the end as one of the characters has an abortion. I thought this was really sensitively dealt with and despite the abrupt change in tone from non-stop fun to serious reflection it fitted in well with the other serious decisions the women were about to make. I also liked the way the ending was left a bit open – sometimes this really grates on me, the whole ‘let the reader figure it out’ ending, but I thought it was appropriate and realistic.

The workplace issues Emma experienced were also a stand out of this book. She’s bored and dissatisfied and sometimes shows it, but nobody deserves to be harassed for sexual favours! Nor does she deserve the treatment she receives while trying to freelance articles. It does show that Emma is a strong character with some principles in the way she rejects getting ahead by refusing to sell herself (body or soul). She’s also a flawed character though with numerous hangovers, hook-ups and personal crises of various degrees of severity. I had no issues with that (after all, reading is the experience without the regrets/hangover) but some people may. Clem was the quieter character of the book, possibly because she’s waiting around for her career to take off – not quite as proactive as Emma. She does show her feisty side in a birthday fight (some of the best dialogue in the book) but she’s more a second fiddle to Emma. The other minor characters were quirky- fun (like Paul, Emma’s flatmate in the ‘nobody lives here, really’ flat above a warehouse) and quirky-weird (Adrian, Emma’s boss who develops a love for fracking). I’d love to read more about Paul and the girls’ friend Yasmin with the secret career, although they did get their happy endings.

All in all, I’d say that Living the Dream is a great Sex and the City meets Girls mashup in book form. Definitely one for your holiday list.