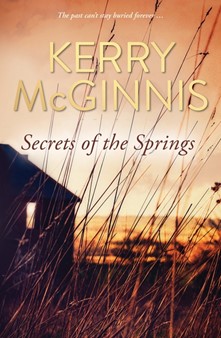 In brief: Orla returns home to Emu Springs somewhat reluctantly to settle the affairs of her uncle. She certainly didn’t expect to be running the family station for tourists, nor finding out a long hidden secret…

The good: Honest and enjoyable, Orla’s an interesting character.

The not-so-good: This was the first Kerry McGinnis book I’ve read, and I’m itching to read the rest now!

Why I chose it: A lovely surprise from Penguin Australia, thank you.

Do you ever get that feeling when you’re reading a book by an author that you’re dreadfully late to the party in reading their work? That you feel like an idiot for not noticing their books before and now you need to go and read all their backlist? I felt like that on reading Kerry McGinnis’ Secrets of the Springs. I’d consider myself to be relatively knowledgeable in the Aussie rural fiction sector, but I’ve never read one of her books until now. How stupid of me! Secrets of the Springs is a very well written, assured story that was all round fascinating. Needless to say, I really enjoyed it.

I suppose you could technically say this was historical fiction, as it’s set in the late 1970s (and some of the narrative relies on those old fashioned things like post and landline telephones). The themes are timeless though and some things like economic downturn and diversifying are very relevant to the current climate. It’s set in Emu Springs, a fictional town near Broken Hill that is slowly dying. Mining left town years ago and the recent years have been very hard on the stations surrounding it. Orla Macrae left town years ago for secret reasons and she’s none too happy to return to see her grumpy, strict uncle for the last time. But on his death, Orla inherits her parents’ property Malvern Park as well as Uncle Palmer’s house and business. Initially she’s there only to finalise everything, but decides to return to her childhood home to make a go of tourism. But Uncle Palmer left a secret she’s aghast to unravel…

Orla’s a sensible character and seeing the novel through her eyes is generally a balanced view, although she does hold back on telling the reader a few things. She does drop enough hints though to slowly piece together her past and the reasons why she’s short with a particular character and dismissive of another. Orla’s a strong silent type too – she rarely mentions her own loss and works hard to scrub, clean and do the very best she can to get the station back on its feet. (I don’t know how many people would wash curtains these days prior to renting/selling a house). Marty, the housekeeper, is a delightful supporting character in whipping up all kinds of delicious food. Like Orla (the closest thing she has to a daughter) she is hiding a few things too. Mark and Ben, station worker and solicitor respectively, are also determined to help Orla to the best of their abilities but express it in different ways.

The mysteries and secrets that come to the fore during the book are explored in different depths. While we hear exactly what happened to Orla’s parents, her father’s previous marriage and daughter isn’t fully explored. This may have been due to Orla’s reluctance to take her father off a pedestal or know the truth, but it could be a potential for a sequel too. There was so much made about the different spellings of Orla’s surname and people with knowledge of her father’s first wife and possibly daughter kept popping up…but nothing. I would have liked to have known the full story, but perhaps I’m being extra nosy.

The writing and plot in Secrets of the Springs flowed well and I was never bored or waiting for something to happen. It’s a solid, entertaining read that was a different aspect of Aussie rural life to what I’ve read recently.

One thought on “Secrets of the Springs by Kerry McGinnis”