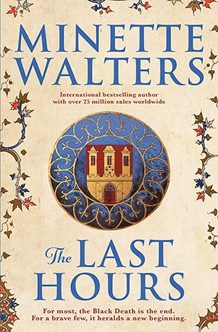 In brief: It’s 1348 and the Black Death has just entered English. Lady Anne of Develish plans to fight it, by barricading her people within its walls. Will it work? How will the people know when to come out?

The good: Lovely to read a Minette Walters book again. She’s a skilled writer who can turn her hand to any genre.

The not-so-good: A little slow to start for me.

Why I chose it: It’s Minette Walters. Thank you to Allen & Unwin for indulging my pleading to read it.

Minette Walters is a writer I’ve enjoyed for many years with her clever thrillers. So when I saw that she had a new novel being released, I was eager to read it no matter what. When I found out it was historical fiction set in the time of the Black Death, that was even better! This chunkster of a novel won’t disappoint as it combines excellent research with memorable characters – and a touch of that thriller background.

The story is set in 1348, a little earlier than the usual periods of historical fiction I read. These are the days of lords and serfs; small villages with a master taking a cut of what the serfs produce. This took me a little while to get my head around (plus some Googling to find out what demesne meant). I wasn’t overly familiar with some of the terms and that serfs had to buy their freedom. Walters does explain this fairly early on, illustrating the differences between the classes with some key characters in Develish. The first that comes to mind is Thaddeus Thurkell, a serf who is the result of a dalliance between his mother and an unknown man (well, to the community). He’s tall, dark and handsome and far more sensible than his family. But he’s a clever man with talents Lady Anne (wife to the lord Sir Richard of Develish) notices. He will later become a key character in ensuring Develish remains well and fed during the crisis. Lady Anne is also a lady beyond her time – she has a grasp of disease and infection, can read people beautifully and has improved the health, productivity and learning of the serfs. Unfortunately the same can’t be said of her husband Sir Richard and daughter Lady Eleanor, who are both spoiled, petulant and far too aware of the power they have over the serfs. Both abuse their power in ways that will have long reaching effects on the people of Develish.

Sir Richard is away brokering Eleanor’s marriage deal when the plague hits Dorseteshire. Lady Anne reacts in a different way to the communities around her – she brings the whole village inside the moat and refuses to let outsiders in. She won’t even let in her husband in, nor Gyles, a trusted friend and senior member of the community. She keeps hysteria under control, but there is trouble inside the now very close community. It’s up to Thaddeus to protect Lady Anne and maintain calm in the community, before the food runs out…

You may think that this sounds a little boring – it’s definitely not. Once the plague strikes, The Last Hours is as captivating as any thriller. There are twists and turns in the plot that are shocking, gruesome and awe inspiring. It’s a tale of the best and worst in human nature. After I got used to the way things were for the time, I devoured this book. It’s powerful and amazingly resourceful – a captivating story in a world without internet, guns, modern medicine or communication. The interest comes from the complexity of human emotions and the way they react while facing adversity. The last fifty or so pages add an even heightened drama, as several key characters have big decisions to make. The writing is taut and as a reader I had no idea what was about to happen, nor how it could be wrapped up neatly… Things do end on a cliff-hanger, with the sequel due for release in October 2018. I can’t wait to read how the characters progress – will Thaddeus choose loyalty over freedom? Who knows what Eleanor will do next? How will Lady Anne save her people?

5 thoughts on “REVIEW: The Last Hours by Minette Walters”