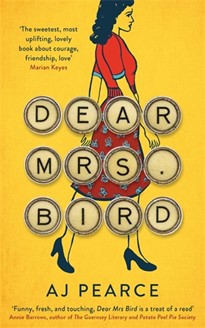 In brief: Emmy applies for a job, thinking it’s a gateway to becoming a War Correspondent. Unfortunately, she’s typing letters for the agony aunt of Woman’s Friend magazine.

The good: It’s sweet and fun with a jolly tone.

The not-so-good: So terribly sad in places.

Why I chose it: Sent to me by Pan Macmillan – I love this kind of book!

Dear Mrs Bird is both an uplifting and heartfelt novel of a young woman in war time. Set in London at the height of the Blitz, it captures both the nuisances of war and the horrors of it. I feel that this story will appear to those who enjoyed The Guernsey Literary and Potato Peel Pie Society as well as those who enjoy home front and coming of age stories.

The story is told from the point of view of Emmeline Lake (Emmy) who is a young woman living in London with her best friend Bunty. She has a boring job, and secretly thrills to be a Lady War Correspondent. Seeing a job in a newspaper to work for a publishing house, she jumps at the chance to let her dreams run wild. Except it turns out that the job is assistant to Mrs Bird, who is both the editor and the writer of the agony aunt column. Mrs Bird has particular topics that can be considered as appropriate for the problems page (in fact, it’s shorter than the list of unacceptable topics). Emmy is a caring girl and starts to answer one letter, then two, then a whole lot… But the story isn’t just about Emmy and Bunty’s larks in the city. As the novel progresses, it gets more serious and darker in tone. (If you find the overly jovial tone difficult at first, persist. As the story progresses, Emmy becomes less silly and really grows as a character). There are bombings to deal with, injuries, jilted lovers and loss. What I thought was a fairly light-hearted story went up in my estimation as I continued to read. It’s a sound novel of experience on the home front, doing the best with what you have and trying to keep a stiff upper lip when all you want to do is cry.

The finale of the novel as Emmy is exposed for her dealings with Mrs Bird’s letters is a little over the top, but I found it to be in keeping with the tone of the novel and Emmy herself. Some things parts of the plot are a little too overplayed, but I think having them more realistically portrayed would have taken some of the fun out of the story. Emmy tells the story through her own eyes, which learn a lot of wisdom over the course of the story. She’s chatty, friendly and most of all honest. I was sad to see her go at the end of the story.

One thing I did find a bit odd was The Random Capitalisation of Phrases. I’m not sure if this was Emmy’s 1940s attempt at emojis or her way of Proving a Point Very, Very Clearly but it was…a bit random. Maybe it was AJ Pearce’s way of Emmy explaining herself but not quite having the words to do so. Once I got over that, I really enjoyed the story. It’s fun, sad and sweet. Definitely a great one for a holiday read!