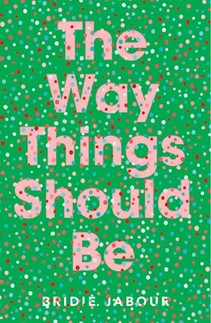 In brief: Claudia is about to get married. Maybe. When her whole family descend on her home town, it is utter chaos.

The good: No holds barred with these characters.

The not-so-good: None of the characters were particularly likeable.

Why I chose it: Sucker for millennial stories – thanks to Echo Publishing for the copy.

I don’t have a snazzy opening line for this review so let’s be honest early in the piece. The Way Things Should Be is a book that on review of the blurb should have worked for me. It has millennials acting strangely, a highly dysfunctional family and a dry sense of Aussie humour. I love those kinds of things. But for me, this book didn’t let me in – I felt like an outsider, at the fringes of the cool group. I desperately wanted to be allowed into the sphere that the characters were in but I felt like a distant observer. Maybe it is because none of them are particularly likeable. Maybe it’s just because it didn’t involve Facebook and Snapchat. I felt like there was a firewall between me and the characters. Perhaps that is that way it’s meant to be – on the outside, looking in.

The book is brilliantly written. Bridie Jabour has a skill in making the absurd seem perfectly rational, which is a rare thing. Reading The Way Things Should Be, I was reminded repeatedly of another dysfunctional family (the Bennets from Pride and Prejudice). Jabour has the wit and the talent to write a skilled story. If I’d liked the characters or felt closer to them, this book would have been a winner for me.

I think one of my problems with this book was that I couldn’t really relate to any of them or feel sympathy. Claudia was the initial choice to be my book friend. She’s smart and is ticking off all the conventional boxes in life but still questions if that is what she should be doing. But sometimes she does really inexplicable things, almost self-sabotage, to try and make sure she doesn’t get too much happiness. I could understand her qualms about her wedding, but not the way she went about trying to convince herself either way. Sister Zoe was also a potential contender. She is almost glamourous, with a secretively cool job that has a lot of Instagram followers. She can also be an absolute bitch! Phinn and Poppy (the other brother and sister) weren’t as intriguing for me – Phinn is eternally nice and sunny (lovely in real life, but a bit too dull in a book where everyone is sniping each other). Poppy is mildly entertaining, but a little too prone to sulking. Claudia’s best friend Nora was my last chance. She’s nursing a secret heartbreak amongst the frivolity, but can she stay sober enough to hold it together? Nora tended to shy away from the big questions until it all exploded in a cringe worthy, can’t-look-away finale. Overall, the characters I’d hoped to barrack for were just a little too repugnant.

Other characters, such as Claudia’s mum and aunt are delightfully disgusting in their lack of tact and self-centredness. Claudia’s mum brings to mind Mrs Bennet, the 21st century version. Even Claudia’s dad is a little like Mr Bennet – happy to stay away from the action and complain mildly in the corner. Aunt Mary seems to come from something more grotesque as she’s just plain weird. Trying to steal from her sister, getting involved with family exes, always worming her way into her sister’s life. She’s plain creepy.

As you might have guessed by now, The Way Things Should Be is a character rather than plot driven novel. The plot is simple. Claudia’s family gathers in their rural home town in the lead up to her wedding. The action moves from sibling sniping to small town gossip and family issues. It’s entertaining, but my point of view felt too distant to be involved with or care about those involved.

2 thoughts on “REVIEW: The Way Things Should Be by Bridie Jabour”