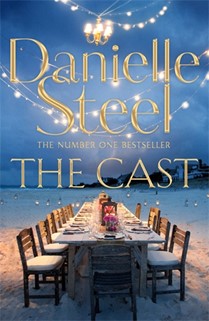 In brief: Kait is an empty nester and a chance conversation at a party inspires her to write the story of a new TV series. When work starts, she has a new family to look after…

The good: Like the blend of family and work family.

The not-so-good: I want to know more about the actors and their lives!

Why I chose it: Danielle Steel’s books are always a fun, relaxing read. Thank you to Pan Macmillan for the copy.

I generally find Danielle Steel’s novels great reads, particularly for midweek business. The Cast was a novel
I enjoyed even more but it’s hard to put the finger on why. Perhaps it’s because it doesn’t cover a huge time frame (about a year compared to a life time). Maybe it’s because it is even more plausible in terms of plot and characters (nothing too zany). Whatever. It was a great read combining everyday life and some very cool parts of life, like writing a new TV show.

Kait Whittier is a magazine columnist who is known for giving wise advice. In her own life, she hasn’t been as successful with two failed marriages. Still, she has her adult children to worry and care about. But is that enough? Her children are scattered across the world and on reflecting on her own childhood at a New Year’s Eve party, it’s suggested she have a go at writing the basis for a TV series. Kait’s grandmother was a woman of determination and grit, and the ‘bible’ Kait writes incorporates those features (but not her life, which was a great plot twist). Kait’s bible falls into the right hands and it’s all go as they find just the right people to play her characters on screen. But nearly every actor or actress comes with their own baggage. On set, the cast become Kait’s second family with their dramas to sort out. But when real life tragedy strikes, it’s the cast who come together to support each other.

Sometimes I feel Danielle Steel’s novels can be bit stop/start and gloss over chunks of the characters’ lives. I didn’t find that all with The Cast. Her writing really flows in this one and with the shorter time span of the novel the reader is there for all of the action. Her characters are quite unforgettable too – Agnes, the former screen queen, now recluse; Maeve, the actress who lights up the screen but who is losing the love of her life and the frustrating, immature but still strangely likeable Charlotte. Not to mention cheating Dan, naïve Abaya and secret weapon Nick. I think each of these characters could quite easily carry their own story!

Definitely a great winter read or one to take to the beach – The Cast will leave you delighted.

One thought on “REVIEW: The Cast by Danielle Steel”