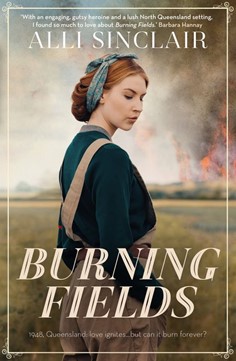 In brief: Rosie Stanton returns home to her family’s cane farm in 1948, only to find her father’s attitudes haven’t moved with the times. Women are still expected to be in the house and foreigners are viewed with suspicion. Can Rosie change that?

The good: A lovely story full of drama and ultimately, hope.

The not-so-good: Attitudes to the Conti family by the locals.

Why I chose it: Recommended to me by my mother.

I have a really soft spot for Australian historical fiction. I honestly believe that I’ve learned more about our country from reading than I did in school – and of course, it’s a lot more pleasurable. One part of Aussie history I’m particularly interested in is the post-WWII era, when people from many different cultures came to Australia. Burning Fields covers the arrival of an Italian family to the sugar cane growing area of northern Queensland brilliantly and also the (slowly) changing role of women post war. Wrapped up beautifully in a story about family and romance, this is a fantastic book to spend a rainy weekend with.

Rosie Stanton, the heroine, returns home to the family cane farm to find things much changed. She’s coy about why she left Brisbane, but years working for the Australian Women’s Army Service have shown her that women have an active role to play anywhere. Unfortunately, her father and her home town haven’t moved with the times. Her father is reluctant to let Rosie play any role in the farm, despite having strong skills in accounting and mechanics. Her mother is falling apart after the loss of her brothers. Rosie’s growing friendship with Tomas Conti, recent arrival from Italy and part of the family who owns the neighbouring farm, is viewed with hostility. It seems that nobody wants Rosie’s knowledge and skills, unless it’s for ‘traditional’ women’s roles. But when Rosie’s father becomes ill, Rosie steps up to run the farm. People aren’t happy with the way she is doing things and Tomas’s own family is warning Rosie to stay away from him. Can Rosie make her way forward?

Alli Sinclair cleverly illustrates the old attitudes towards women and immigrants in Burning Fields without preaching. It fits in perfectly with the story and having Rosie as a strong, independent heroine further highlights the differences in a time that really wasn’t that long ago. Rosie isn’t perfect though, which makes her all the more likeable to the reader. She’s frustrated with the men in town treating her like dirt and her initial reaction to a family secret is honest (if not all that ladylike!) Tomas is a sweet hero. When I say sweet, I mean that he’s modern and content to let Rosie find her own way while he supports her in the background. His own war history was also fascinating to read, as it revealed a period in history I didn’t know a lot about. There is another character who nearly steals the show – Tomas’s Nonna. Nonna is a feisty lady who fully believes in the rights of women and cares deeply for her family. Nonna is also not backwards in coming forwards. She also introduces Rosie to the pleasures of delicious Italian food!

Overall, Burning Fields is a lovely story that details the role of women in the post-war era combined with a delightful romance. Definitely a fun read!