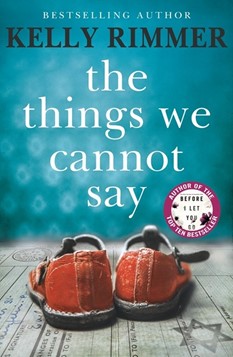 In brief: Alice’s life revolves around her son Eddie. When her grandmother becomes ill and askes Alice to find out what became of her family in Poland during World War II, can she do it?

The good: Great story that is heartfelt.

The not-so-good: Some parts are heartbreaking.

Why I chose it: Thank you to Hachette for introducing me to Kelly Rimmer’s novels.

I’m a bit late to the party when it comes to reading Kelly Rimmer’s books. Like the blurb on the back of The Things We Cannot Say, I enjoy reading Jodi Picoult and Kristin Hannah – so why have I not read her books? It’s something I’ll definitely be rectifying after reading this book! Moving and powerful, Kelly Rimmer combines the frustrations of being different in today’s world with the horrors of war.

The story begins in the present day as Alice stands in the supermarket powerless as her son Eddie has a meltdown over the change in packaging for his favourite brand of yoghurt. She’s judged by other shoppers but Eddie is autistic and this is a big deal for him. It’s the kindness of one stranger that has Alice in tears. Her beloved grandmother is in the hospital after experiencing a stroke and Alice’s mother is being judgemental as always. Alice’s husband Wade can’t help/won’t help and everything is…well, too much. Then Alice’s grandmother asks her to go back to Poland to find out what happened to her family and friends after World War II. Can Alice change the routine and stability of her life for this? And in doing so, will it set her free?

The second part of the dual narrative is the story of Alina, growing up in Poland during the second world war. When the Nazis invade, it changes the quiet farm life and plans Alina had to marry her sweetheart Tomasz. Life becomes much scarier and unpredictable. Alina is somewhat ignorant of this, carrying on in her forgetful ways until reality hits. Can Alina survive the war without getting into trouble?

For both Alice and Alina, there is a lot of stake as they navigate through events that life has thrown at them. I must say that I was pretty annoyed at Alina at times as she seemed to take a lot for granted that she would be looked after. She’s quite immature at the start, relying on her mothers or brothers to keep her safe. Admittedly, her parents try to shelter her from the worst of the invasion but she’s a bit flighty. It’s not until the stakes are much higher than Alina comes into her own and tackles things head on. (I do think I am a little biased though, as my grandparents were forcibly taken from their parents as children during the same world war. Alina is kind of lucky in my eyes that she had more time with her family). Alice appears to be much more accepting of her fate, but copes by bringing Eddie into a life of routine where she is the essential one. She is fiercely protective of Eddie, perhaps to the detriment of her own relationship with her husband and daughter. Like Alina, it takes a major break from the routine to open her eyes to what is happening around her.

The ending to The Things We Cannot Say is incredibly powerful and I defy anyone not to at the very least, sniffle. It’s heartbreaking but it’s a happy situation that gives the reader the resolution they need. Kelly Rimmer expertly lifts the emotions of her characters off the page and into the hearts of her readers. I can’t wait to delve into her back catalogue and be amazed by the strength of her observations of human interaction again.

2 thoughts on “REVIEW: The Things We Cannot Say by Kelly Rimmer”

Leave a Reply to shelleyrae @ Book'd Out Cancel reply