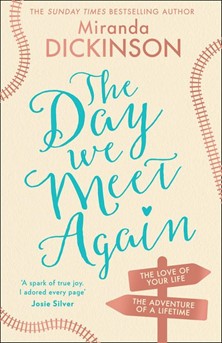 In brief: Sam and Phoebe meet at St Pancras station and instantly fall in love while on their way to other journeys. They decide to meet again in one year if they feel the same way. How will the year change them?

The good: A lovely premise for a story.

The not-so-good: The rumination of both characters on what the other is/isn’t saying got a bit old for me.

Why I chose it: Sounded like fun, thanks to Harlequin for the copy.

An insta-love story with an almost immediate forced separation? Count me in on that. Miranda Dickinson’s novel tells a story of two strangers who meet during a prolonged train delay and fall in love. (Don’t you wish that could happen to you during transport delays?) The problem is, both Phoebe and Sam are about to start big, important year long journeys. Neither of them had planned on allowing for a relationship to complicate their trips. But in the space of several hours, they decide that if they feel the same way about each other in exactly one year, they will meet again at St Pancras station. If they don’t…well, they don’t turn up. No hard feelings, right?

It’s the start of a love story that just begs to be made into a movie. And in true movie style, Phoebe and Sam have made rules. They can send postcards to each other and texts with the occasional phone call. So it’s not quite the pining lack of contact that brings them back together at the end of the year. Rather, it’s the endless analysis of what he or she said or didn’t say that threaten to drive the couple apart before they’ve even properly started. Sam is off to find the father who left his life as a child and get over an awkward breakup. Phoebe is trying to spread her wings, gain confidence and live on a whim. Because they don’t really know each other that well, Sam doesn’t know that Phoebe tends to anxiously overanalyse everything and Phoebe isn’t aware that Sam can barely talk about feelings and his past. That’s where the fairy tale instant attraction love tends to wither rather quickly. With only limited contact, the pair hang on to every word of the other, examining it until they find a potential fault. Phoebe’s impetuous ‘I love you’ has Sam freaking out, followed by Phoebe convinced that she’s driving him away. Sam’s lack of in-depth discussion of finding his father has Phoebe convinced that he doesn’t want to tell her everything when Sam just doesn’t know how to say it.

Told in alternating chapters by the main characters in first person, this analysis of the other’s words got a bit wearing for me. Knowing exactly what was going on, I found the rehash of Sam’s/Phoebe’s take on whatever the other had/hadn’t said repetitive. Perhaps this part of the story would have been better told in larger chunks by one character so the reader didn’t have the omnipotent view. Phoebe’s jitters, which didn’t have a clear reason, were also irritating sometimes. It would have been good to have some backstory as to why she was so cautious to be on her own, especially given Sam had a rather detailed background. To me, Phoebe came across as immature which didn’t match her age or her educational background (I have no idea how she managed to write her PhD thesis when she is so indecisive)!

There are a lot of near misses in this book, especially towards the end. It’s a sweet idea, but bogged down by the continuous introspection and a lack of growth in Phoebe. Probably a good pool or plane read, but some nights I just couldn’t face the continuous revising of the characters’ actions towards each other.

One thought on “REVIEW: The Day We Meet Again by Miranda Dickinson”