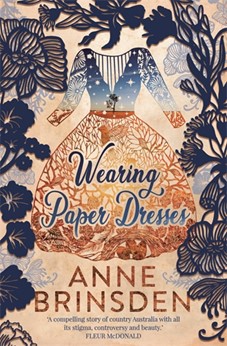 In brief: When a family move to the country to help on the family farm, it’s difficult for all the women but particularly so for Marjorie…

The good: Quirky, yet moving.

The not-so-good: The first one hundred pages are very slow.

Why I chose it: Thank you to Pan Macmillan for the copy.

Wearing Paper Dresses was a difficult read for me. I’m in the minority of people who didn’t like The Dressmaker, so the comparisons didn’t really help. I struggled with the first part of the book but made the decision to persevere to see if the book could stand on its own away from comparisons. The second half was much stronger and more dramatic but overall it wasn’t my cup of tea.

The story is about a family who move from the city to the country to assist on the family farm in the 1950s. Elise is truly a city woman and she’s far too glamourous for the women in the Mallee region who are suspicious of her coloured meringues and fashion. It makes for a lonely life, without friends and few supporters as it seems her husband is under the thumb of his father and initially neglects to realise the toll the move is having on his family. The daughters, Marjorie and Ruby, realise something isn’t right with their mother. At first they worry, but then they relish their freedom until it’s gone again. As the years pass, Elise’s mental health worsens and the men in the family ignore it or are blinded by other issues. Eventually tragedy strikes and the family are forced to confront what has happened.

I had some issues with the time period in the novel. It starts in the 1950s but later on, it sounds like it is almost in the modern day. Trying to keep track of Marjorie’s age was the way I tried to keep in my head the time period. The majority of characters were also quite unlikeable – Marjorie chooses to shock at times but sometimes I felt she chose to close her eyes to issues (perhaps following in the footsteps of her father and grandfather, the latter who needs to stop being such a pig). Elise was someone to be pitied at first, but her mood swings could be fearful. The townspeople were also downright cliquey and nasty to anyone who didn’t meet their idea of ‘normal’. In the end, my overall feeling towards the majority of the characters was anger. Anger that the way they deliberately closed their eyes and shunned others and chose to stay away from what they did not understand. I’d like to hope that things have changed in modern times.

Overall, there are some moments in Wearing Paper Dresses that brought out strong emotions for me. Other times I was confused and frustrated at the lack of events and realisation of the characters. The writing is well done and very polished for a debut novel.

One thought on “REVIEW: Wearing Paper Dresses by Anne Brinsden”