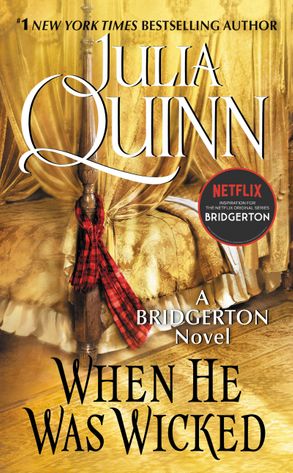 In brief: The story of the ‘quiet’ Bridgerton, Francesca. She’s a young widow who decides she wants a baby. The new earl is desperately in love with her and also happens to be a good friend of her and her husband’s…

The good: Getting to know Francesca, who has been an enigma in both the books and the TV series.

Why I chose it: The sixth book in the Bridgerton series.

Francesca has always been the Bridgerton that readers and viewers don’t know much about. In the first season of the TV series, she spends 99.9% of her time in Bath. In the books, she seems to spend all her time in Scotland. The reader doesn’t even get to hear about her wedding as it takes place between books, nor that she has been widowed. She’s always been on the fringes of the family, perhaps drowned out by Hyacinth, Eloise or a game of Pall Mall. But When He Was Wicked is Francesca’s time to shine as the reader finally gets to know her. It’s a great story of love, loss, duty and desire.

Francesca has always been a little overwhelmed by the rest of her family. She’s not as loud and opinionated but rather quiet and happy to be in a smaller group. She married John in a love match and moved to Kilmartin, where he was the earl. Unfortunately, he died young and Francesca, deep in grief, has hibernated. John’s cousin and his (and Francesca’s) best friend, Michael, is now the earl. But in his grief, he ran away to India. Four years later, Michael is back. Francesca has been managing the estates well and she’s also come to the conclusion that she needs to marry again. She wants a baby and she’s pragmatic that she won’t find the kind of love she had with John. Michael is also being pressured to marry and produce an heir to the earldom. His problem? He’s been in love with Francesca for years and years. How can he make her see that he can love her, but in a different way to John? And that neither of them will be betraying John’s memory? His method is unconventional, but passion seems to be the key to Francesca’s heart…

When He Was Wicked is completely different from the previous books in the series, keeping it fresh and unexpected. Francesca is such an unknown that it’s delightful to get to know her better. She’s clever and quiet, but she knows her own mind. She’s also not afraid to break the rules when it suits her and she’s not easily shocked. (Good thing, as Michael delights in trying to shock her multiple times). Francesca is older and more experienced in this novel, lending an insight into adult life that her sisters haven’t really had to deal with in their books. It was a pleasure to get to know her, and like all the Bridgertons she knows how to be witty. Michael is almost the antithesis of Francesca, being the light-hearted poor cousin initially and then running to another continent in his grief. It took him some time to accept that he now has the role meant for his cousin and reform his rake status (which like another rakes in the series, is somewhat exaggerated). He’s kind and patient with a good turn of phrase, both wicked and otherwise. (Julia Quinn’s sparkling dialogue is on fire in this novel – it’s on point every time). The story is just gorgeous, easy to read and easy to engage with. It feels modern, perhaps because the sex scenes are definitely not Regency level, but I think because the plot is an age-old dilemma (friends to lovers). It’s delightful and reminds me of why reading should be fun.

One thought on “REVIEW: When He Was Wicked by Julia Quinn”