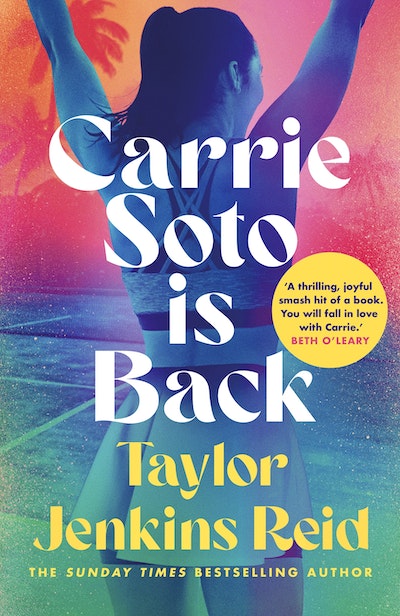 In brief: Carrie Soto is a champion tennis player with more grand slam titles than anyone else. But when it looks like her record is about to be beaten, Carrie comes out of retirement to try to break it again.

The good: Carrie is a fascinating character – driven and stubborn.

The not-so-good: There is a lot of tennis games!

Why I chose it: Love Taylor Jenkins Reid’s novels and keen to see more of Carrie.

Setting: All over the world

A new Taylor Jenkins Reid book means it’s time to sit down and concentrate on reading. I was eager to get my hands on this novel and devour it. Not only is there a mention of Mick Riva, but Carrie of Malibu Rising infamy gets her own book. While Carrie Soto is Back is not as complex character or plot-wise as The Seven Husbands of Evelyn Hugo or Daisy Jones and the Six, it’s still a lot of fun. (Be warned though if you hate tennis, you won’t enjoy large chunks of this book).

We didn’t learn a great deal about Carrie in Malibu Rising, but it wasn’t always pretty. Carrie seemed like a super god, driven by tennis. This book starts with Carrie’s youth focusing on tennis and then climbing the ranks of the pro circuit. Her whole career is told in a surprisingly fast summary, because this isn’t about Carrie Soto’s rise to tennis stardom. It’s about her comeback to defend her record number of Grand Slam wins at the age of 37. It’s not easy, but Carrie learns more during this journey than throughout her original time in tennis. Carrie had always been aloof in tennis, taking what she wanted off the court and on. She lived for tennis and for the win. Her job was to be the best, always. And when it didn’t work out, she didn’t really know what to do. But now Nicki Chan is on the cusp of taking Carrie’s record and Carrie can’t let that happen. Carrie’s father agrees to be her couch once again and she starts training again for four Grand Slam events – Melbourne, France, Wimbledon and the US Open. It’s an opportunity for her to reconnect with her father and revisit a brief old flame Bowe, as he’s the only one in tennis who will practise with her. But the journey is more emotional that Carrie even considered. Can the Battle Axe lose her reputation and gain a new one?

This novel was like a late coming of age story. Carrie is a character that’s easy to dislike, which why I think it was genius that Taylor Jenkins Reid told the story in the first person. Knowing Carrie’s weaknesses and fear made it a lot easier to understand and like her. Seeing her drive and determination was also inspiring, as well as life on the circuit with its endless hotel rooms and flights. The major non-person character is tennis. Now, I’m not really a tennis fan (to the point where I wasn’t consciously aware that there are different types of courts), but Carrie’s passion for it has made me mildly interested to look up at the news when the US Open is on and think about ball placement, serves and etc. I don’t think the book will ever make me pick up a racquet (unless it’s a Nintendo controller) to play, but I now appreciate the skill and analysis that goes into the game. (I think it also helped that Serena Williams and the US Open were on when I was reading). I’d love to read more about Carrie’s nemesis, Nicki Chan, who is the complete opposite to Carrie – open, blunt and hungry for the win. Carrie’s father, Javier, was also a fascinating character with the patience for the long game that his daughter never really learned. Gwen, Carrie’s agent, was also a straight-talking woman. As for Bowe, he was softer and less driven than Carrie (which is really not saying much, given that Carrie is more driven that anyone else around). His story was interesting, but rightfully not interesting enough to be the focus. The whole book is focused on Carrie and tennis, which means it loses some of the complexity of other TJR novels, but is still a great read (despite the cover having an awkwardly placed palm tree that makes it look like Carrie has a pom pom).