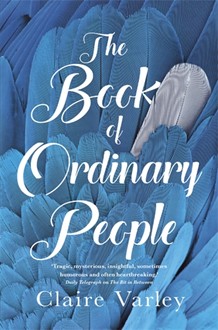 In brief: The story of five ordinary people in Melbourne – their heartache, worries and pain.

The not-so-good: The majority of the story is not happy.

Why I chose it: Thank you to Pan Macmillan for the copy.

The Book of Ordinary People is not a happy book. It’s a serious story that explores a number of themes like loss, fear and war. There is hope at the end of the story, so it’s not completely dark and it’s very sensitively told. You won’t be looking at your fellow commuters in the same way again…

The novel is centred on five different people who live in the suburbs of Melbourne. They are linked, as the reader sees eventually, but fairly loosely. The story is told in the third person with alternating viewpoints of each of the characters. Aida is a refugee, forced to flee Iran. Now she is waiting for the fateful letter which determines whether she can stay in Australia. Living with fellow asylum seekers Elham and Niki brings experiences back – the island, the things that nobody should have to witness…plus Aida’s father is sick and there is no way she can go home. DB is a hotshot lawyer in his mind, but is drifting away from his family. Can he come back to grass roots level and become Ben again? Nell is his junior lawyer, not enjoying life in a big firm and with a pro bono case that is more complex than it seems. She starts to wonder what her path should be or if a fall from grace could happen as easily to her as it did her client… Rik is a journalist with a past he’d rather forget. Now he’s writing for a community newspaper and hiding from his partner. Can he make peace and move back into his old life? Evangelia is grieving at the loss of her mother. She’s trying to tell her story, but nothing is appearing that’s out of the ordinary. Where are her memories and why didn’t her mother leave any legacy?

Claire Varley deals with a number of sensitive issues in The Book of Ordinary People with grace. She explores the attitudes to asylum seekers, as well as the point of view from a number of asylum seekers. Knowing Aida’s background as well as the history of her country makes her story even more powerful as it brings a sense of real people with real issues to the reader. No longer is an asylum seeker someone on TV, but Aida. She’s real, she has fears and worries. She works, she has friends. Another issue that is covered is domestic violence. The reader hears Madeline’s story through the eyes and hear of Nell which strengthens the story. When you read Nell wondering if that could happen to her, you wonder if you would react in the same way. It’s all about giving a face to issues and making them personal. This is something Claire Varley does very, very well.

The only character I found slightly irritating was DB, and I think he’s meant to be portrayed that way. He’s the guy with the sports car, the house in the right suburb and the right connections. Except he’s not really that good at it, which makes him more human, particularly when he realises that life isn’t about zany nicknames and being the best of paper. DB was most honestly portrayed through the eyes of his family, who saw him as a good guy essentially who has lost his way.

Overall, this story is quietly powerful. While we might be ordinary, we all have a story of our own to tell.

2 thoughts on “REVIEW: The Book of Ordinary People by Claire Varley”